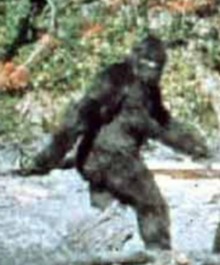 Bigfoot hunters were perhaps the most surprising group, [author Christopher] Bader said. They defied all stereotypes of paranormal pursuers who wear flowing clothes and commune with spirits.

Instead, they were very serious, extremely conventional and often highly professional. In fact, their beliefs contradicted their lifestyles so much that many of them were plagued by anxiety, which drove them even further to stick to their beliefs.

“Their friends and family consider them kooky,” Bader said. “Everyone is saying they’re nuts. So, they have a real aggressive style and seriousness of purpose. They want to prove everyone wrong.”

–From a fascinating Discovery article on the prevalence of superstitious beliefs. Other key findings: Women are more likely to believe that they live in haunted houses, and “unmarried white men are most likely to believe in UFOs.”