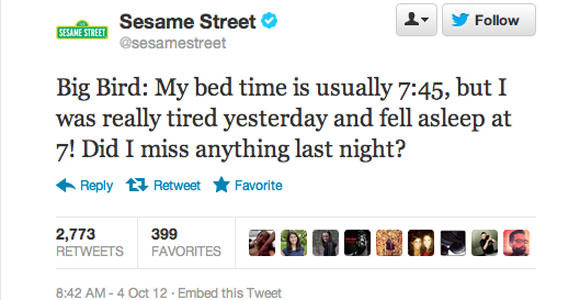 Did you watch the Presidential debates last night? If so, you heard candidate Mitt Romney talk about cutting the government’s funding of PBS (all 0.01% of it). As if that wasn’t awkward enough, considering the debate was being moderated by long-time PBS journalist Jim Lehrer, Romney also name checked Big Bird. And it was the “OH SNAP!” heard around the world. Twitter saw a huge rise in “Big Bird” tweets seconds later and continuing on through the night with mostly everyone coming to the yellow fowl’s defense. But today, something even more amazing happened. Big Bird responded, in his own Big Bird way, from the Sesame Street twitter account.

Sesame Workshop, the group behind Sesame Street, also had something to say…

We are a nonpartisan, nonprofit organization. We do not comment on campaigns, but we’re happy we can all agree that everyone likes Big Bird!

And there you have it.