Why I Love, Hate The Big Bang Theory | The Mary Sue When I found out that Stan Lee would be appearing in this week’s episode of The Big Bang Theory, I was momentarily elated.  This was swiftly followed by sadness when I reminded myself that no matter how much I want to enjoy it, every time I watch an episode of TBBT I feel bad at the end of it.

It would be wrong to say that I think The Big Bang Theory is a bad show.  In fact, I think overall that TBBT is a very good thing for geek culture, and it is clear to me that the guys behind it are true geeks. But the fact remains that I feel excluded and sometimes even insulted by the show.  And I don’t mean insulted by inaccuracies, like that you can’t steal loot off of your companions’ corpses in World of Warcraft.  Worst.  Game reference.  Ever. (/shove glasses up nose /toke on inhaler).

I’d like to try and explain why I think The Big Bang Theory is good for geek culture, and why I nevertheless hate it.

Why The Big Bang Theory Is Good For Geeks

The sitcom has historically been a way for minorities and concepts that the mainstream is uncomfortable with to be presented inoffensively.  This is frequently done in a way that does not represent the full scope of the demographic portrayed, and the subject can be presented in a neutered or stereotypical way.  Despite these drawbacks, I believe this sort of thing is an important step in having your subculture accepted by the mainstream.  As Marjane Satrapi writes:

Humor is the most important and the most efficient way of communicating: if you can make people laugh then everything is fine. Humor is also understanding the spirit of the other one. 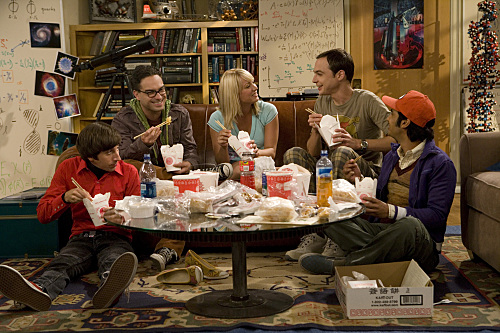 The Big Bang Theory is great in this regard!  It’s about science, and intellectuals, the value of Wis vs. Int emotional intelligence in addition to regular intelligence.  The fact that a sitcom about nerds was even greenlit by a major television studio says something good about where geeks are moving in the overall culture.  It is even more amazing that the show is made by geeks.  You doubt it?  Take a look at this picture, snapped by Wil Wheaton during filming, of the characters’ on-set coffee table.  None of that would be picked up by a camera, and yet, it is part of the set dressing.

There is a part of me that is very glad that The Big Bang Theory exists, because it means that geeks are becoming more relevant than ever to the wider culture.  The rest of me has recognized that I can’t watch it anymore, because it never fails to make me feel completely excluded.

Why I Hate The Big Bang Theory

I love Leonard, and I think Raj is very sweet.  I could probably comfortably go toe-to-toe with Sheldon.  Howard, well, he’s a character who is designed to be offensive.  I wouldn’t mind being friends with any of them (minus Howard, as previously discussed).  What does that make me?

Well, it could be Penny, the love interest.  Penny isn’t a geek.  Penny is uninterested in science, literature, comics, sci-fi, and fantasy.  Penny, though socially adept, cannot intellectually keep up with any of the characters. 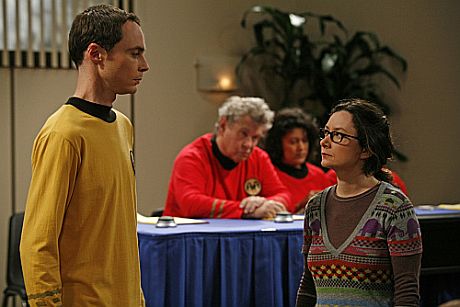 Penny isn’t the only female character to choose from, however.  There’s also Leslie Winkle.  She’s a physicist, and just as smart as the other characters.  However, she is unattractive (or Hollywood Homely), unemotional, and uses Leonard for sex.

These are my choices?  I can either be geeky and a bitch, or wanted but incapable of being a geek?  Screw that.

The Big Bang Theory does a relatively good job of presenting the geek to the mainstream.  It isn’t perfect; I still had to explain firmly to my mother why comparing my friends to Sheldon is insulting, but it’s nice to have something out there other than news articles about the gamer who starved to death playing Starcraft, or the guy who beat his friend with a hammer over a D&D disagreement.  Against its other content, the fact that it does not represent the large number of perfectly likable, well-adjusted (lets say at least closer to Leonard than Sheldon) female scientists, geeks, and gamers is glaring.

The episode that made me decide that I couldn’t watch TBBT anymore is the one when they take Penny to the comic book store.  She walks in on their heels, and every person man in the place looks up and fixes their eyes on her before returning to what they were doing.  I must have made some kind of noise, because my mother turned to me and asked,

“Is that what it’s like when you go to [the local comic book store]?”

I looked at her, shocked that she even needed to ask the question.  “Yes.” I said, “Every time.” 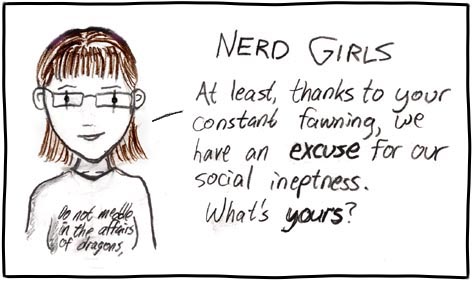 And then it occurred to me.  Penny should be out of place in a comic book store.  She is completely uninterested in comics.  I, however, also feel mildly discomforted in most comic book stores.  I keep an I Believe in Harvey Dent button on my backpack, want to sew the Nightwing symbol into the back of my new black jacket, and can name each of the women Jason Todd thought might be his mother in A Death in the Family.  And yet, I’d still like to be able to visit a comic book store without having every person look away nervously and pretend like they weren’t staring at me every time my gaze coincidentally sweeps past their faces.

Every time Penny gets teased for, for example, not knowing who Stan Lee is, a part of me thinks “Well, if she had more geeky interests, she wouldn’t find these situations so awkward.”  And then I remember that a lifetime of experience has shown me otherwise.  I love The Big Bang Theory, I think that it’s really funny, and I think that it is good for the geek community.  However, the show constantly reminds me that I am a minority struggling for acceptance into geek culture.

At least I still have How I Met Your Mother.