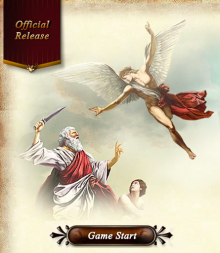 For those of you that weren’t aware, there’s a browser-based free-to-play Bible MMO, and judging by the contest The Bible Online is having, most of you probably weren’t aware. You see, the developers claim the actual name of the game is “too general” and that “it is difficult to optimize for search engines such as Google.”

Three user entries will be given special prizes, though the prizes haven’t been detailed, and one entry will presumably be chosen as the game’s new name. Seeing as how the game is an MMO, the three prizes will most likely be some kind of special in-game item. Here’s a list of some funny entries found within the contest thread:

Kind of strange that a game named after one of the most famous and recognizable books of all time with an “online” slapped on at the end wouldn’t yield enough hits.

(The Bible Online via Massively)