Betty White Coming to SNL On May 8th: Thanks, Facebook [Followup] 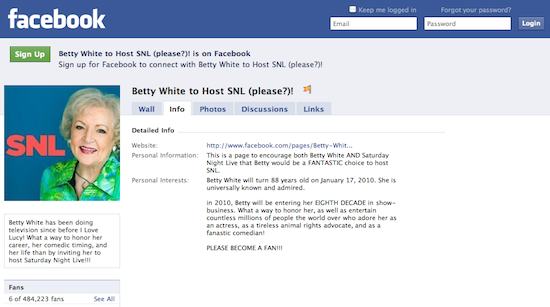 We’ve previously reported that the Facebooking hordes successfully petitioned SNL to get Betty White to host. Mow, we’ve got a date: May 8th, the night before Mother’s Day.

USA Today is reporting that Betty White will be hosting the May 8 broadcast of Saturday Night Live after refusing the spot for years. White, whose legendary status has persisted to a younger generation through her role in The Proposal, playing beer pong with Jimmy Fallon, and, yes, those Golden Girls reruns on Lifetime, became the center of a Facebook campaign to get her to host after the debut of her new Snickers ad during the Super Bowl. And Lorne Michaels couldn’t sound happier about it:

The SNL head told USA Today that having White host was something he has always wanted, and while he has always felt the same level of affection for White as the Facebook fans have, it was their public support of her that “validated that.” While White called the opportunity “lovely,” she quipped that she was only hosting because “my agent said he’d divorce me if I didn’t do it, and I love my agent.” White had turned down the show three times previously for being too “New York.”

Read the rest of the story on Mediaite.