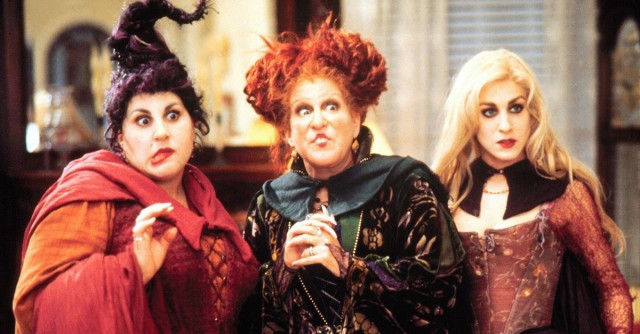 It’s nearly impossible to have a Halloween without an equally hallowed rewatch of the 1993 Disney classic Hocus Pocus–starring Bette Midler, Sarah Jessica Parker and Kathy Najimy as a trio of sister witches who are awoken from their centuries-long slumber by an unsuspecting virgin. Fans of the cult film have frequently expressed their desire for the Sanderson sisters to return for a sequel, and while one has reportedly been in the works for, oh, about four years now, there doesn’t seem to be any forward momentum on the project for the time being.

However, that hasn’t stopped Midler herself from being particularly vocal about her desire to resurrect the Sandersons once more (she once told fans to “inundate” Disney with their pleas for a Hocus Pocus 2). For Halloween this year, her costume was living proof that if Disney wanted to make a Hocus Pocus sequel tomorrow, they’ve got at least one Sanderson who’s ready to suck the lives out of little children:

Today I met my idol. @BetteMidler thank you for taking the time to talk to me & pose with me. #BetteMidler #Hulaween pic.twitter.com/TH8nSDbbZM

That’s right. Midler dressed up as her character from Hocus Pocus, Winifred Sanderson. She donned the witchy duds for an event in Manhattan hosted by the New York Restoration Project, a non-profit organization Midler herself founded in 1995.

Unfortunately, Midler’s co-stars didn’t show up in character, but this alone could very well be enough to renew fan interest in a follow-up Hocus Pocus movie, right? That, or put you in the mood to watch the original ten times this weekend.