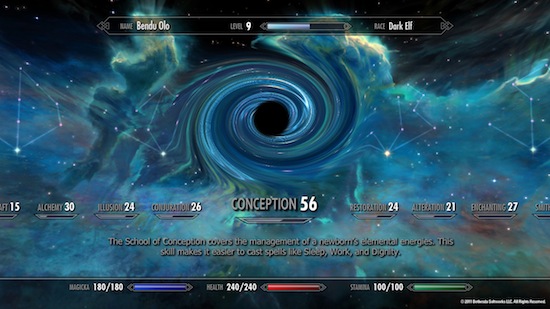 Last Friday, The Elder Scrolls creators Bethesda took it upon themselves, in a serious act of public service, to let us all know that if we wanted to birth a child on The Elder Scrolls V: Skyrim’s release date–11/11/11–that was the best day to get on that (ha). Bethesda wasn’t satisfied with simply putting this information out there, so they turned it into a quest–IRL–with an unknown reward being offered to anyone who could successfully birth a child on the designated date, then name it “Dovahkiin,” which translates to “Dragonborn.” They also provided this hilarious disclaimer:

Disclaimer: Any reward for completing this quest will not ultimately justify the potential teasing your child could — and probably will — endure over its lifespan. Bethesda Softworks is not responsible for your parenting. You may gain experience points for completing this quest, but you will not care at 3am on a work night. Completion of this quest may also result in decreased desire to play video games and/or function as a human being. Consult with your friends before embarking on this quest; while it may not start in prison, it probably ends there.

If anyone was unsure if Bethesda was just throwing jokes around, or really were going to provide a quest reward, they updated their original post detailing the main part of the RL loot, which consists of every single Bethesda game, past, present and future, for free:

If anyone is seriously considering this, we’ve got a few ideas in mind for a collection of quest rewards. How’s this for a shower gift: a Steam key that will grant you, and presumably Dovahkiin him/herself, every ZeniMax/Bethesda game — past, present and future — for life. Once your child eventually achieves cognition — and grows old enough to play intense video games — we think it will agree that this key blows away a pink pleated onesie. As for the rest of the loot, we’ll leave it as a surprise.

One can only hope that the rest of the unknown loot ends up being a shot at completing the Helping Hands quest, seeing as how a baby Dragonborn will probably be a little tough to take care of for a while once he or she finds out it’s just a name and not a destiny.