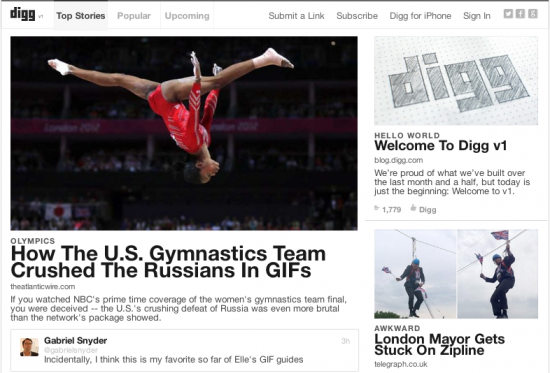 Digg, the news aggregation site that took the Internet by storm back in 2004, is back once more. The site has been given a complete makeover by Betaworks, a news media site that bought Digg for $500,000 back in July. There’s no question that this isn’t the Digg we’ve seen before, for better or for worse. Is it worth your time, though? After all, there are a number of similar websites out there now that didn’t exist when Digg first popped up.

Digg has definitely had its ups and its downs. It went from being one of the most popular sites on the Internet in 2008 to nearly going belly up after its v4 update in 2010. This complete overhaul of the tried-and-true format of the site caused many users to jump ship, some of which turned to competitor reddit. A number of staff members were hired by the Washington Post just this past May, leaving many to question whether the site would close its doors for good. But in July, Betaworks bought Digg’s website and brand for $500,000 and announced shortly thereafter that the site would be rebuilt from the ground up in six weeks. The six weeks are up and Digg is here, but leaves us wondering if it was worth the effort.

There are some cool things about the new Digg. It supposedly works a lot better with sites like Facebook and Twitter, gives more power to the user in determining what floats to the top, and provides support for a number of formats like external web pages and mobile devices. Notice how I said “supposedly.” All of those features add up to diddly if users can’t actually access the site. As of writing, Digg has been having errors slapped with “504 Gateway Time-Out” left and right. This will surely be fixed in the near future, but as things stand, it’s absolutely deadly for their reputation.

That isn’t even the biggest problem according to users. The new form Digg has taken on completely wipes out access to the website’s archives, effectively eliminating seven years of content with a wave of the hand. The team behind the revamp shot themselves in the foot when they did this; they’ve removed a huge source of traffic. It will be hard to bring that traffic back, especially since a lot of previous users might feel further isolated and even betrayed by the move.

This is where we’ve hit on the real issue at hand. Digg v1 is focused on luring one kind of crowd: New users, not old users. Digg wants to attract people with its sexy new look and its cool new connections with Twitter and Facebook, but the old users bear this expense. That said, I can see where Betaworks is coming from. So much of Digg’s user base left after v4 that it seems impossible to bring those people back. It is a far safer bet to cater to new users rather than try to beg and plead with old users to give the site another chance. If Digg could find a happy medium between the old and the new, it might actually have a chance at returning to glory. They’re just not there yet.