The Rebellion Against Digg v4

If the comments on almost every Digg frontpage article are to be believed, today marks the day that many Digg users plan to jump ship, if they haven’t already done so. “Make RIPP DIGG your profile image Monday is Abandon Digg Day,” reads one often copy-pasted comment. Many commenters extol the newfound virtues of Digg’s sorta-rival in the social bookmarking business, Reddit, which recently struck a rebellious, pro-user pose by defying its corporate masters at Condé Nast and running free advertisements in support of Proposition 19 when Condé forbid it to “benefit financially”off of the issue of relaxing anti-marijuana laws.

Since last Wednesday, when Digg underwent a major overhaul and became Digg v4, the grievance against the site has been that it’s sold its user base out to big publishers and advertisers. Whereas Digg content used to be driven by user submissions, now, publishers automatically submit articles via RSS feed, from whence they get Diggs up — the unit of social currency that determines what content makes it to the site’s front page — primarily from their “followers,” the users who subscribe to their feeds. The new Digg looks, therefore, like a mix of Facebook, Twitter, and RSS.

Is the new Digg as broken as its detractors are saying?

The front page, for its part, does not make the new Digg look like a site that anyone would want to read.

It’s not that it’s not pretty, with a cleaned-up blue-and-white design and bulbous tabs and buttons that scream “social,” but the “top news” feed, which is supposed to curate the top articles as chosen by the whole site’s community, is seriously broken. The names of just a few publishers dominate, often in clumps, with many articles hitting the front page with fewer than 100 Diggs. (For what it’s worth, there have been some far more Dugg up articles critical of Digg v4 which have not hit the front page, despite Kevin Rose’s assertion that “All diggs are still equal.”) And it’s not even those publishers’ best stuff: There are not one but two not-that-highly-voted-but-still-frontpaged articles about the wonder that is a Foursquare ad in Times Square; one story touts Paris Hilton’s uproarious comparison of herself to Stewie Griffin.

How broken is the new Digg in favor of publishers like the BBC, Engadget, and Mashable? Extremely so, at present. I’ve tallied the 142 front page articles by publisher since Digg v4 went live: 92 of those stories have come from just 13 publishers. It’s even more unbalanced at the very top: Wired has gotten 7 front page stories, the BBC has gotten 8, Engadget has gotten 16, and Mashable has gotten a jaw-dropping 21 front-page articles. In contrast, last year, social media watching firms thought it was a big deal that 50 different sites controlled 46% of the Digg front page.

Update: Media Caffeine has made a handy pie chart: 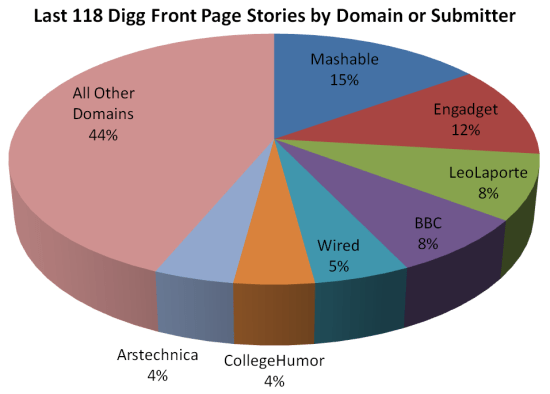 Update, 10:45am: Well, this has to be hugely embarrassing: 10 of the top 12 stories on the Digg homepage are currently from Reddit.

Update2, 11:40am: It appears Digg has randomly deleted a bunch of the Reddit stories without explanation. Hmmm … 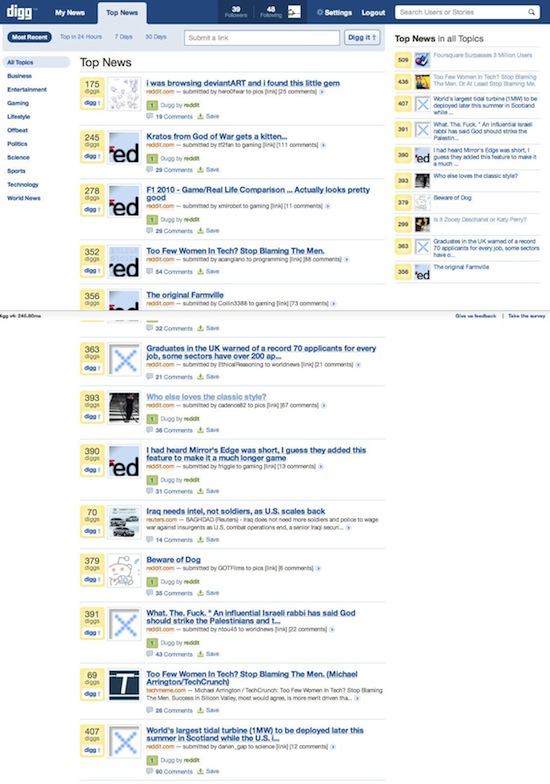 Now, cut Digg a little slack: v4 was a major overhaul that kicked in less than a week ago, and Kevin Rose has promised fixes for many of the bugs that currently afflict it. But many of the changes are likely here to stay: Most notably, Rose has vowed that the site will not be reinstating the “bury button,” which allowed users to give a story minus one Digg and thereby diminish its chances of hitting the front page. “By removing the bury button we have put a stop to the bury brigades. The “hide” button next to every story also acts as a “report” button, if enough people hide a story a site moderator is notified and we review it for TOS violations.”

Huh? I can understand Facebook not wanting an ‘unlike’ button because they don’t want people to troll your beach photos, but a social news voting site with no way to vote “no” is not really a news voting site at all, bogeyman ‘bury brigades’ aside. The lack of a bury button further tips the equation towards mega-publishers and big advertisers. A site like Mashable, which covers social media, has a large following on virtually every social platform imaginable, and many of their readers seem to find almost every thing that they write interesting. However, if you’re part of the broader Digg community and you are not riveted by Foursquare’s advertising in Times Square, you and the many people who share your sentiments have no way to vote such stories down, and the main feed for the site as a whole becomes seriously unbalanced.

Just a few of the protests the new Digg has inspired among its original users: 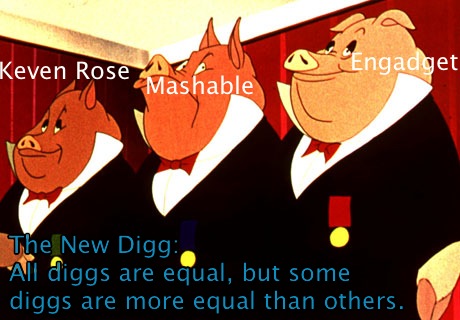 And an allegory: (reprinted with the author’s permission; click to enlarge)

Andrew Sorcini, a.k.a. MrBabyMan, one of the most influential (and most vilified) users on Digg pre-v4, has expressed his concerns about the site’s direction in an open letter, in which he warns that the RSSification of the new Digg at the expense of “individual content curation” threatens to make it irrelevant:

@KevinRose @Digg_community Please don’t let individual content curation die out for the sake of RSS auto-fed publisher accounts. I’ve been telling the Digg team this since I was invited to Digg HQ to test the V4 alpha earlier this year. Publisher accounts are currently dominating Digg’s front page. I completely understand the financial need to engage publishers, but without the individual-user posts that, in my opinion, made Digg a unique destination for original content, the new Digg has no more relevance than a Popurls or an Alltop (sorry, Guy), merely repeating (relinking) what everyone else is linking.

My concern is, that if Digg solely exists now to serve mainstream publishers, then it may as well be a publisher-to-publisher service, as the appeal for the individual user to visit the site will have been replaced by a constant stream of ad-supported marketing. I’m not concerned for Digg’s former users, as there are plenty of other destinations for them to find unique, original content, but it saddens me to see Digg, once the best of the best destination, stray from its core competency.

But Digg v3 wasn’t a paradise: It had its share of complaints too. The most prominent complaint, in fact, were that “power users” like Sorcini controlled the front page just as completely as large publishers appear to control the new Digg. In a Reddit comment, The Next Web‘s Alex Wilhelm lucidly (and saltily) sums up this point of view, and warns against baselessly beating up on publishers:

A few thoughts from the publisher perspective here, and why I don’t think that what we submit is “corporate spam.” In version 3 around 100 diggers ran 80% of the front page – to get on the front page you had to cover Kevin getting a blow job from Stallman, or get a power user to submit your story. At that point Digg was not a democracy at all, but a curated list by paid Digg pros who shilled for hire. If you were a nice guy, or a tech publisher, you had power digger friends who would submit your stuff for you for free. Salt of the earth guys, but even Technorati 100 publications had basically zero power. HuffPo maybe had some swing, but only in their brand and URL, not in their account.

By letting publishers submit and grow their follower base Digg is literally forcing a new power structure where individual votes to individual stories are led by content creators. Perfect? No. Better? Maybe. Right now “my news” and “top news” fucking blow. I hope the algo changes to get better shit up, but I like what Digg is doing.

Wherever you stand in the power users vs. publishers debate, Wilhelm is undeniably right in one aspect: The only hope for Digg v4 is that the algorithm gets a lot better. Digg’s adamant opposition to a “bury” button makes me somewhat skeptical, but there’d be some hope if they came up with a mechanism that discounted the large followings of mega-publishers like Mashable and Engadget and gave a boost to smaller publishers (and nonpublishers) whose stuff seemed to be getting Dugg organically by a broader base of readers rather than by a herd of mindlessly loyal followers.

Of course, there remains the worrisome possibility that what we have right now is Digg’s endgame: That once a few cosmetic changes have been made, the new Digg will be the rather sterile playground of a few big publishers with aggressive social media strategies, with the very occasional breakthrough article coming from other quarters. Such a site would not be for me, and I suspect it would not be for many Digg v3 users. But there are probably a lot of people out there who don’t bother with RSS readers, for whom a vaguely social site that bathes them in the same vaguely familiar set of articles might be just their cup of tea. As Digg seeks to go mainstream and make some money, towards which v4 is a blatant power play, it seems to have accepted the risk of alienating its user base in favor of this more casual sort of reader. Still, one hopes they aren’t aiming so low. If this is the direction Kevin Rose is headed, he’d best pray that more of his readers don’t discover Reddit — much less Popurls — anytime soon.