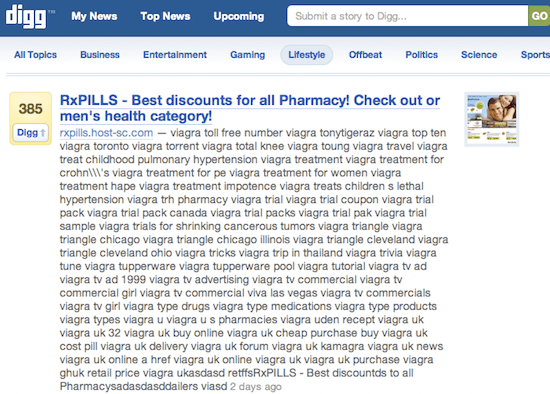 Well, that’s embarrassing: It appears that social news site Digg got badly gamed by a group of spammers, who heavily promoted an “article” which linked to a Viagra spam page. Though the screenshot above, plucked from Google’s cache of the since-deleted article, shows 385 Diggs, Hacker News readers say that they saw 634 Diggs before the article was deleted. This would be, to say the least, a very rare occurrence if it was not the product of a black hat scheme.

Moreover, the article garnered 17 seemingly fake comments, like “I buying for myself earlier,” “free shipping is cool,” and “MAN, i went thru those 30 tablets like nothing, WHEW they were great. I could really use the other 60.” All of these received numerous Diggs up. [screenshot of the full page]

This is some of the most blatant social media spamming we’ve seen, and we don’t blame Digg’s engineers for having a hard time dealing with it; it’s one thing to stop a few repeat spammers, but it’s another matter when hundreds of more or less new accounts (see “spoomeister’s” Digg history) are synced to push one story. It’s not clear if the link hit the front page, though those numbers would normally be sufficient to do so.