The 15 Best Exercises from Training Montages | The Mary Sue

The 15 Best Exercises from Training Montages 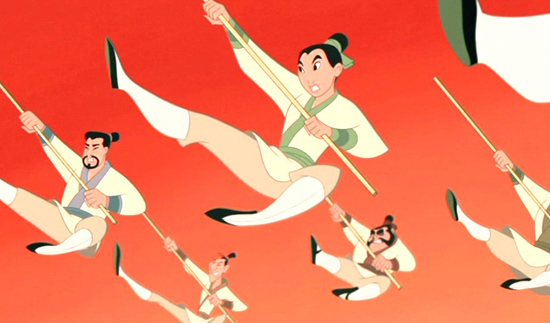 A remake of 1984’s Karate Kid comes out this weekend, where the main character learns Kung Fu.

We’re just as confused as you are, but, we do fondly anticipate one thing: another entry into the long cinema tradition of training montages in action movies, full of kicks, punches, defeat, perhaps a loss of hope, and then comfortingly certain triumph.

But the other thing that training montages have to be full of is things that would make even professional personal trainers raise an eyebrow.  We’ve collected fifteen of our favorite training montage exercises, from the ones that made us go:

“…what is that even supposed to do?”

To the ones that made us go:

“WTF THAT IS HARDCORE.”

A group of world-class female fighters are kidnapped from a young age, and trained to become lethal killing machines masquerading as high-class escorts. It’s no surprise, then, that the training sequence in this gem of a movie includes push-ups by the ocean. With the water negating most, if not all, of the weight resistance, this workout really is just an excuse for a very unsubtle wet t-shirt scene. No complaints from this geek.
Grade: C-/A+, depending how you see it.

When Stephen Hawking is threatening to flunk you, and only your football-headed, infantile best friend can help prepare you to take him on, the natural activity is mountain-climbing. And it has to be snowing. And you need to fall down a few times, to really get the message of satire in there. Realistically, this would probably be a ton of exercise, but for any real mountain there’s no way you’re making the ascent and getting back down in time for whatever you’re actually training for. And if it’s physics, then it’s really not even going to do any good.

Sheriff Wylie Burp (Jimmy Stewart‘s final film role) actually does a whole bunch of things to get Tiger, a city slicker and fat cat, to let out his inner dog so that he can survive a showdown at high noon with Cat R. Waul’s gang of gunslingers. Fetching bones, barking, rolling in dirt, and good old fashioned stuff like chin ups and push ups. The only video we could find is in German, but it kinda improves the experience.

Best thing about this one? John Williams channeling Aaron Copeland.

Another true test of the warrior is in his reflexes, and his patience. If you can snatch an animal out of its natural habitat, either a fish from a river or a fly with some chopsticks, you just might make it to the swiftness of a coursing river.

Plus, you’ve got a meal. Nutrition is an important part of every work out routine.

Sure, Evangelion pilot Asuka Soryu can defeat Israfel on its own, but when the Angel splits itself into identical twin Angels–as gigantic, hostile immortal beings tend to do–she finds herself unable to achieve victory. The only solution, of course, is to spend two days synchronizing every one of her actions with partner pilot Shinji until it becomes second nature to both. From playing some Twister-DDR game to watching their underwear fly on a clothesline, it’s no wonder I loved watching this show as a gangly, pimpled 13-year-old.

When the old way just isn’t working out, you have no choice but to upgrade. But learning the new is no easy task. It requires a great amount of stamina, put towards grabbing, sitting, running, but mostly flashy ’80s dance moves. But anyone can do those moves without knowing the new way. Only by performing for a questionably sentient can of beans can one truly become in tune with the way. As an exercise, this probably would work well over a long period of time, but the single routines they do just aren’t gonna cut it. And oh, those shorts.

We can’t find any video evidence of this, but our resident Batman-And-Everything-That-Inspired-His-Creation-Correspondent clearly remembers a scene in The Mark of Zorro (Antonio Banderas, Anthony Hopkins, Salma Hayek, etc.) where Banderas is doing a plank on two chairs, with several lit candles underneath his bare chest, while Hopkins uses a whip to snuff the candles one by one from the other side of the room.

We’re not sure exactly what it was supposed to do, but it does explain a lot about our correspondent.

Training while standing on posts is a mainstay of the action movie training montage, and if you really want to turn it up, the trainee must be poked by people with sticks, and probably made to feel pretty silly. It’s in Batman Begins, Mulan, and even Lamb: The Gospel of Biff (is it a montage if it’s in a book?).

It all just comes down to creativity and not getting bored with your workout.

Check out a video here.

Ouch. That has to hurt. We see people breaking through wooden boards all the time. Sometimes even large quantities of them all at once, but they get some momentum into it and use their whole bodies. Breaking wood by punching on it from only a few inches away is another beast altogether. If it had to be compared to another beast specifically, it would probably be the tiger. The eye of the tiger, that is! But seriously, if you can master this skill you can defeat anyone. And you’ll never feel anything in your knuckles again.

“Your eyes can deceive you. Don’t trust them.” Alright, Obi Wan, we get it, the force. But training blindfolded and generally being a blind B.A.M.F. is nothing unique to the Star Wars universe. Though Luke getting blasted by those dinky orbs may be the cutest instance. Daredevil is basically entirely about the practice, while we see similar events in The Matrix Revolutions, Dodgeball, and even Talladega Nights. And it’s a nice simple way of telling the audience, “Yeah, we’re pretty good at this.”

People are made of meat, so what better way to train to punch them than to punch meat in a freezing, eerie locker? This exercise will not only get your fists a-pumping, but it will also train your nose to deal with awful stenches. It trains a fighter for the worst, because even the smell of defeat is nothing compared to the smell of tons of hanging, gutted cows swaying back and forth, from the punching. The only thing that could make you feel any stronger or more epic would be if you had a little recorder playing “Mooooo!” with every punch. Cattle rustlers are out, cattle wrastlers are in.

If you don’t have any cows on hand, hot sand is a popular alternative, as seen in The Last Airbender and in Samurai Jack. The exercise is also performed to deaden the nerves in your fists, so that punching others becomes less painful (for you) over time.

This training regimen is fairly common in the world of montages, but is on this list specifically because of the first episode in the second season of Samurai Jack. In Jack Learns to Jump Good our near-nameless hero is taught how to jump like the Hulk by a tribe of peaceful monkeys, in exchange for teaching them to defend themselves against ferocious ape thieves. This is accomplished mostly by having him do exactly as they do, only with a number of large rocks strapped to his limbs, and a boulder the size of a car on his back.

Back in the early nineties Bruce Wayne had to take a break from being Batman due to spinal injuries, and when he came back he had to train hard enough to be able to take the costume back from the guy he had left it with, who had gone completely insane in the interim. How?  Well, he’s Batman.  Some sit ups and a few laps around the track aren’t even in his vocabulary.

He went to Lady Shiva, the greatest assassin in the world, and got her to train him. Shiva really wanted to fight Batman, but she considers anyone who hasn’t killed someone in combat to be unworthy of her. So, she tries to trap him in a situation where he has to kill. Here’s how:

She puts on the mask of a Japanese bat demon. She kills an armless ninja master (“This is how one kicks!”). Then she gives Batman the mask, and lets the master’s seven greatest students track him down. Batman is eventually forced to fake killing one of them in order to keep Shiva from sending yet another after him, which only results in Shiva informing him that now they can fight for real and she will do her best to kill him. Someday. When he least expects it.

The idea of the Agoge, a brutal social machine for turning children into warriors, is ancient. The Spartans did it first, it was borrowed by Frank Herbert for the Sardaukar in Dune, and the Battle School in Ender’s Game is basically the same thing.

Take a bunch of children. Put them somewhere with minimal adult supervision, personal belongings, and food. Force them to compete for their lives (or what they perceive to be their lives). The ones that don’t die, break down, get crippled, or kill themselves will be the fighters you need to defeat all armies/keep the nobles houses in line/destroy the buggers.

All that physical strain hogwash you’ve read in the last few posts have no place here. Strength is NOTHING. Intellect is NOTHING. Will is EVERYTHING. Assuring geeks around the world that exercise is unnecessary, we present to you a series of quotes from various sages, mentors, veterans, and hermits-in-the-woods. They said it:

“Use the Force. Yes. Lift the stone. Feeeel it.“

“Don’t think you are, know you are. Come on! Stop trying to hit me and hit me!“

“Don’t think. Feeeeel. It is like a finger pointing away to the moon. Don’t concentrate on the finger or you will miss all that heavenly glory.“