Sesame Street Workshop Says: Bert and Ernie Are Neither Gay Nor Adults 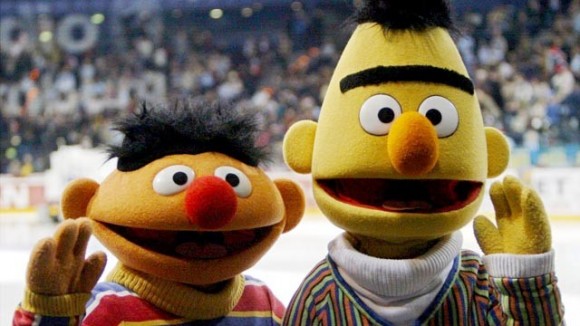 The congressional victory for marriage equality in New York has been a beautiful and inspiring thing to see. And Sesame Street, frankly, should follow suit. But PBS would like us to be clear about something: Bert and Ernie are not gay. They’re not straight, either. They have no sexual orientation. But mostly: they’re meant to represent kids, kid relationships, kid desires, kid arguments, and children should not be getting married. Sesame Street is not a 17th century farming community. None of those monster-puppet children should be getting married to anyone.

The source of this fact that Seseame Workshop now all wants us to know, is a petition — found on Facebook — started by Lair Scott, who states that allowing Bert and Ernie to join together in matrimony would expose children to a happy, homosexual relationship and teach a great lesson in equality:

We have started a petition to Sesame Street and PBS Kids asking them to allow Bert & Ernie to get married on the show. If done tastefully, this would greatly help put an end to the bullying and suicides of LGBT youth. Sesame street should recognize that there are LGBT relationships, families, and include them in their show.

We totally agree, as long as that couple is someone other than Bert and Ernie. Because as was mentioned before, Bert and Ernie are children. Sesame Street offered this response to the petition, which is predictably polite:

Bert and Ernie are best friends. They were created to teach preschoolers that people can be good friends with those who are very different from themselves.

Even though they are identified as male characters and possess many human traits and characteristics (as most Sesame Street Muppets™ do), they remain puppets, and do not have a sexual orientation.

This should not be taken to mean that Sesame Street should not avoid the issue altogether. If there was a gay or lesbian couple residing on The Street and there was a story about how they were finally going to be married because lots of really good-hearted people knew that all they wanted to be was happy together, that would be an amazing addition to the already progressive children’s show and it’s frankly about time. In fact, Grover once received an explanation from a young guest who described marriage as “two people who get married.” But if there was ever going to be a homosexual character on Sesame Street, it would have to be an adult character. It’s true that there are adult muppets on the show, but primarily as the parents or relatives of the main characters, or less rounded joke characters like Guy Smiley or Mumford the Magician. Lets get some gay parents on Sesame Street, but lets not attach sexual identities to nonsexual characters in children’s programming. The whole “Jerry Falwell thinks the Teletubbies are gay” thing wasn’t just rediculous because of how homophobic it was, but also because the Teletubbies weren’t sexual in any actual way.

Of course, this only really bears out if Sesame Street were to refrain from presenting child crushes as well, which we don’t have the memory bank storage to remember if they’ve ever covered. The show does have a lot of kid friendships between children of both genders, and if we’re going to show kids that having a crush is okay, then we should show them that it’s okay no matter the gender of the person you have a crush on. But we’re pretty sure that issues of sexual attraction are somewhat outside the purview of Sesame Street, with its age range of pre-schoolers, aside from the necessarily implied forces that brought the adult couples on the show together. It is high time that those implied forces were also represented by a gay or lesbian family.