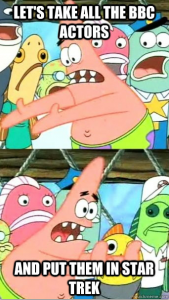 Get ready, everyone — this is some pretty ‘splosive casting news: Noel Clarke (who played Mickey Smith on Doctor Who) has just been cast in J.J. Abrams‘ sequel to Star Trek. That’s not all. Benedict Cumberbatch (Sherlock, The Hobbit) has also been cast — as the villain. We’ll just let that simmer for a little while. Noel Clarke, returning to space. Benedict Cumberbatch trying to take it over. Nerds are going to go wild, and I will be included among them.

Not many details are available about their characters, besides Cumberbatch’s villain role, but the addition of these two particular actors is pretty exciting, just in general. Because they are them, and they both have such great British cred, which, frankly, has nothing to do with Star Trek. But in Clarke’s case, he also has sci-fi cred from his “freelance alien hunter” career on Doctor Who. His role is being described as “a family man with a wife and young daughter,” but with no other clues as to where in the Star Trek universe that will fall. We will just have to be patient. Insanely patient.

As for Cumberbatch, he is, indeed, stepping in where Benicio Del Toro stepped out after turning down the villain role a few months back. And no, there are still no details on which villain this is going to be, but Susana immediately exclaimed “HE’S GOING TO BE A VULCAN,” which would look seriously good on someone like Benedict Cumberbatch. (And his Sherlock is the tiniest bit Vulcan-reminiscient, isn’t he?) One thing we do know is that this villain is not likely to be Khan (aka KHAAAAAAAAN), but as a tribute to the legendary bad guy, the plans for Cumberbatch’s bad guy are to make him just as iconic and badass.

That is a lot to be excited about, and it’s only the fifth day of the year. Already, we’re shaping up for an exiting year of movie news — and the more BBC alumni, the better!