Those watching Star Trek Into Darkness closely for any information have focused intently on the identity of Benedict Timothy Carlton Cumberbatch‘s character. It’s clear he is the villain, but precisely who he is has wavered back and forth, from the infamous Khan of the first second Star Trek movie (okay, that only hurt a little to type), to Gary Mitchell, a telepath and antagonist of TOS episode “Where No Man Has Gone Before.” Gary Mitchell seemed like a safe bet after Karl Urban accidentally called Cumberbatch’s character ‘Gary,’ though producer and writer Roberto Orci later denied that Cumberbatch is Mitchell, while confirming that he is a previously established Star Trek character.

After certain scenes in the Japanese teaser trailer released last week, however, evidence seemed to point to Khan. Now, Paramount has released a press photo labeling Cumberbatch and his character name, and it’s not one that anybody recognizes. 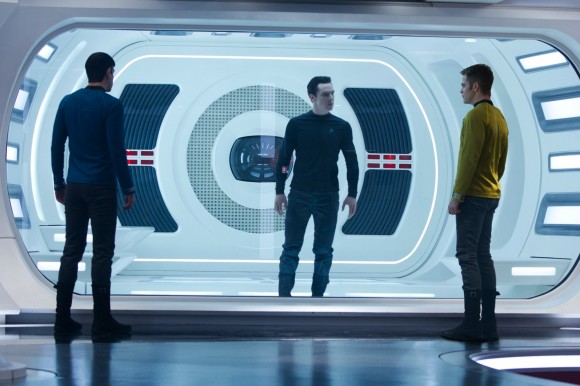 According to Paramount, this is:

“(Left to right) Zachary Quinto is Spock, Benedict Cumberbatch is John Harrison and Chris Pine is Kirk in STAR TREK INTO DARKNESS from Paramount Pictures and Skydance Productions.

While I’ll admit my Star Trek knowledge isn’t encyclopedic, John Harrison isn’t the name of any character on the Star Trek wiki (although it is the surname of one particularly well known extra’s character). So if you asked me, if this name isn’t a mistake of some sort, or a deliberate piece of misdirection, it’s most likely a name that Cumberbatch’s character has assumed.

So… we still don’t know who he is, or, as some fear, whether he is a white actor cast as a character of canonically Indian descent.

On the other hand, the crew of the Enterprise hasn’t seen The Avengers and has not yet learned their lesson that placing the villain inside a terrarium doesn’t work out well for anyone.