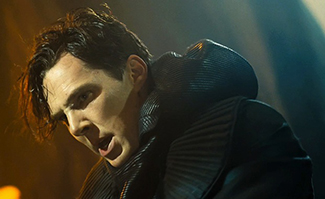 “It’s achingly irritating… Believe me, I’d rather talk about the role and the fantastic story and all the things J.J. [Abrams] has come up with. And then everyone would be as excited about the film as I am. But then of course I think I would be on a phone call coming from J.J.’s office.” — Benedict Cumberbatch speaks out on how he wishes he were able to talk about who he’s playing in Star Trek Into Darkness already.

He went on to praise Abrams’ withholding of information, however, saying “We live in the modern world, which is a place of oversaturation and now people, especially Trekkies, want to know everything before they witness it themselves… I think of it as a kid having a box of chocolates and not knowing what’s good for them. They eat three and they keep eating as they get sick… and the candy is gone.”