Belle Is a Breathtaking Take on Beauty and the Beast That Tackles Grief, Internet Culture, and Rediscovering Yourself

When I first saw the trailer for Belle I immediately labeled it as “the first anime film of the year that will make me cry.” I was right in my assessment, but I didn’t realize how much Belle would, frankly, wreck me by the time I got to the end credits.

At its core, Belle is a visually stunning reimagining of Beauty and the Beast, something that took me entirely too long to figure out (it’s called Belle, there’s a Beast, etc.) Beyond that, though, is a story about a girl working her way through her grief, the sudden pressure of being everyone’s Internet fave, and taking the steps necessary to feel the confidence she feels online in the real world. 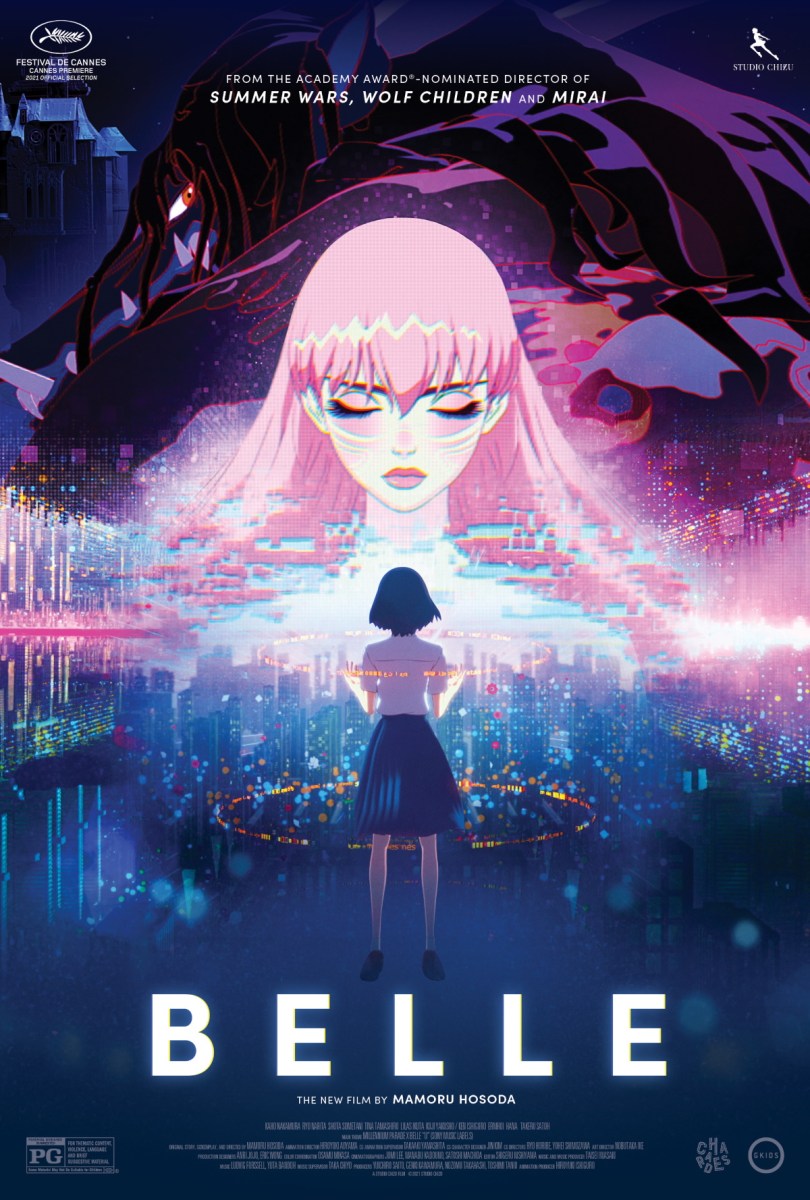 From the celebrated Academy Award-nominated director Mamoru Hosoda and Studio Chizu, creators of Mirai, Wolf Children, Summer Wars, and more, comes a fantastical, heartfelt story of growing up in the age of social media.

Suzu is a shy, everyday high school student living in a rural village. For years, she has only been a shadow of herself. But when she enters “U”, a massive virtual world, she escapes into her online persona as Belle, a gorgeous and globally-beloved singer. One day, her concert is interrupted by a monstrous creature chased by vigilantes. As their hunt escalates, Suzu embarks on an emotional and epic quest to uncover the identity of this mysterious “beast” and to discover her true self in a world where you can be anyone.

Why Belle hit me as hard as it did

Whenever a story says that it’s going to be about the virtual world and how the characters use it as an escape from reality, I get worried that the end message will belittle the relationships we gain on the Internet. That’s because a lot of my closest relationships have been from the Internet (my wife, for example) and social media has been a major aspect of how I stay in touch with my loved ones – especially now.

I know the Internet can be a hellscape, but I always worry that movies, where characters are clearly using it as a coping mechanism, won’t talk about the very real fact that, sometimes, that escapism is important, and sometimes, we end up taking our online experiences to become better versions of ourselves in the real world.

To my delight, Belle shows all aspects of Internet culture, from the entitlement fans have toward prominent figures, to the fact that a lot of us value our time online because things aren’t great in our regular lives.

“U” isn’t creating some unbelievable version of its users, it’s bringing out what already exists inside of them. Suzu’s online persona, Belle, feels like a radically different version of her, but as the story progresses Suzu realizes that Belle has always been who she is.

Suzu doesn’t suddenly pick up a passion for singing because of Belle, she becomes Belle because she wants to sing again.

Belle is more like an expression of Suzu’s feelings, feelings that have been lying dormant because she’s going through a heavy situation in the real world. This makes you wonder if it’s like that for everyone who enters into “U”, especially since the online avatars are so unique. Honestly, the character designs of the movie reminded me of why I love animation so damn much. The range of online avatars is a real treat to see, several not even being human.

The reason why Belle hit me so hard is that Suzu’s transformation into Belle is similar to what I did in college. I was a lot more confident online than I was in person, and I was a lot more open about who I was online because I wasn’t ready to share that with the real world. But eventually, that confidence ended up leaking out of all of those chat messages and Facebook posts and became a part of who I am today.

That’s kinda what happens with this movie. There isn’t ever a moment where someone is admonishing Suzu for using “U” or bemoaning how many folks are online, the Internet space is a space that exists. That’s it. And we’re following a character who uses it to not just escape her grief but confront it head-on.

The same can be said for the Beast in the movie.

What’s neat about the clear Beauty and the Beast similarities is that it takes the familiar story beats and goes in a completely different direction. The reason behind the Beast’s motivations fit with the movie’s “Internet escapism” narrative, and like Suzu, the Beast makes you realize that virtual spaces are a valid place to go if you need a minute to breathe. The main takeaway is to, eventually, take the strength you’ve gained online and apply it to real life, to take action against the things upsetting you in real life, something that the characters begin to realize because of the confidence they’ve gained online.

You can’t rely on the Internet forever because you can’t exist in it forever, but that doesn’t mean there’s nothing of value to gain from it.

Seeing grief and hardship tackled in such a way really spoke to me, and it’s especially relevant during a time where a lot of us are online because we can’t go outside as much as we used to. Belle is such a necessary take on how we use the Internet to work through our feelings and how that reflects on our real-life interactions. I know it’s early in the year, but this is definitely going to be one of my favorites of 2022 and years to come.

Belle is out today in theaters.