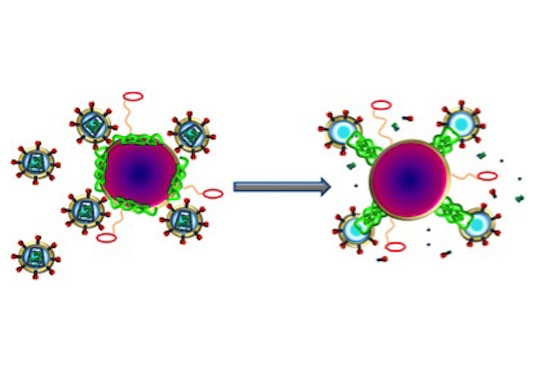 The line between poison and medicine can often be a slim one. Medicines like morphine can be toxic if you overdo it, while poisons like cobra venom are being investigated in the hopes of uncovering their medicinal qualities. The latest case in point? Researchers at Washington University in St. Louis are reporting that nanoparticles loaded with the venom that gives bees their sting could one day mean a new weapon in the battle against AIDS.

The Washington University team used nanoparticles coated with mellitin, a toxin found in bee venom that can puncture not only cell walls, but also the tough envelopes surrounding viruses like HIV. The technique has already seen some experimental success battling tumor cells, but to make it effective against HIV, researchers had to modify their playbook, adding a set of molecular “bumpers” to the particles. These obstacles send the nanoparticles bouncing off of cells they encounter, as they don’t have enough room between bumpers to connect to the cell and deliver their poisonous payload.

There is plenty of room, though, for them to embrace the much smaller HIV viruses. Once they encounter the virus, the mellitin on the nanoparticles surface bonds to it, then proceeds to drill a hole in and peel away the virus envelope, disabling it by essentially skinning it alive. That could sound like a grisly way to go, but hey, it’s just an HIV virus, and nuts to those guys. Good riddance.

Rather than an injectable cure, the hope is that these nanoparticles could one day be used as a preventive measure, stopping HIV before it can make its way into the bloodstream. Dr. Joshua L. Hood, who co-authored the study that appeared this week in the journal Antiviral Therapy, outlined his vision for a prophylactic gel using the nanoparticles.

“Our hope is that in places where HIV is running rampant, people could use this gel as a preventive measure to stop the initial infection.”