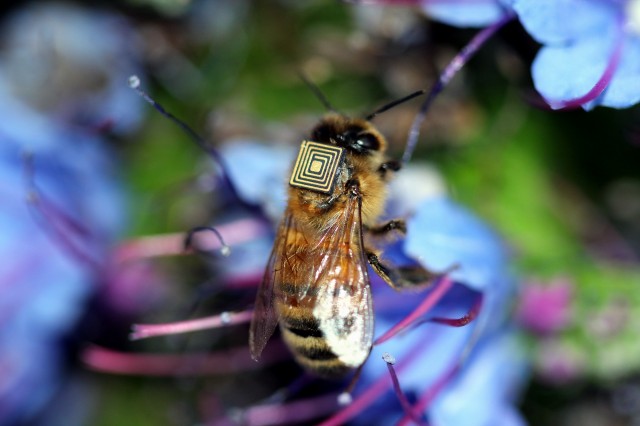 In an effort to better understand the chilling phenomenon of Bee Colony Collapse Disorder, Australian scientists have fitted 5,000 sensors onto the backs of honey bees. This is a very important scientifoh my god LOOK AT THE LITTLE BEES WITH THEIR LITTLE MICROCHIPS AAAH. Sorry, what was I saying? Right, yes. Important science.

All joking aside, this really is an important scientific investigation on the part of the Commonwealth Scientific and Industrial Research Organisation (or CSIRO), Australia’s largest national science agency. Pollinating bees play a vital role in most agricultural industries around the world, and reports of their sudden decline over the past couple of years have most onlookers spooked. So any information we can obtain about what the little guys are up to could be useful. Because Australia hasn’t quite been affected by massive amounts of bee death in the same way that everywhere else has, it seems like the perfect place to perform such an experiment.

To track these insects, CSIRSO is using 5,000 2.5mm x 2.5 mm long sensors, which they stuck on the backs of bees from Hobart, Tasmania, before releasing them back into the wild. These sensors use Radio Frequency Identification (RFID) to record when the bees pass certain checkpoints and then relay that information to a central location, where the scientists, working along with the University of Tasmania and  the Tasmanian Beekeepers Association (someone please go tell Eddie Izzard that’s a thing), can build 3D models based on the data using a technique is referred to as “swarm sensing.”

CSIRO science leader Dr. Paulo de Souza hopes that with these microchips, the researchers will be able to monitor the impact of pesticides on bees, help local farmers increase productivity, and understand the average bee’s relationship with its environment.

“Bees are social insects that return to the same point and operate on a very predictable schedule. Any change in their behaviour indicates a change in their environment. If we can model their movements, we’ll be able to recognize very quickly when their activity shows variation and identify the cause,” Dr de Souza said in a statement.

This is a much better idea than we’ve ever come up for stimulating honey bee pollination in this country. Seriously, the best we could do is stinging Nicholas Cage almost t0 death in a giant wicker basket right before burning him alive in that awful Wicker Man remake.

To be fair, that worked pretty well in the film, but microchips are probably safer. Less effort, too. Who wants to go through all the trouble of seducing a man, bearing his child, luring him onto your Pagan matriarchal island ten years later, and then constructing a giant wicker basket for his head? Not me, that’s for sure.

(via Phys.Org, image via CSIRO)