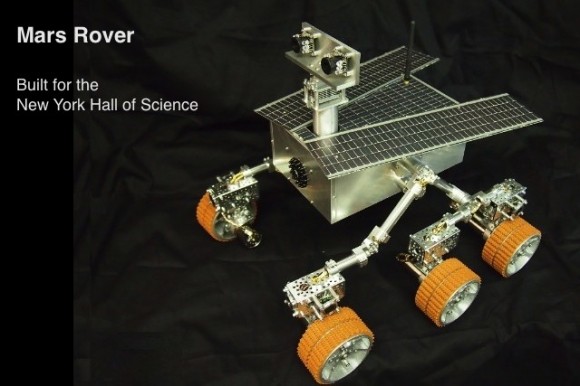 Sisters Camille and Genevieve Beatty have been working with their father to build robots since Camille was only 11, so by now the pair can build a better robot than most adults. 13 year old Camille and 11 year old Genevieve have built several working, controllable robots, and they’ve recently unveiled another, very impressive feat of engineering based on the Mars rover Spirit.

The model rover, which you can see above, was built by the talented young women with some help from their father using tools from the Asheville, North Carolina Beatty Robotics workshop, which their family owns. Installed in the New York Hall of Science on June 8th, the robot was built as a replacement for the outdated rover in the Mars exhibit. The new rover, which is able to be controlled by visitors, is slightly smaller than the rover it is modeled off of, about the size of a toaster, and has no arm for the sake of durability over long periods of use by museum visitors. Still, the Beattys’ robot does include the solar panels that are found on Spirit, as well as infrared camera, sonar sensors, and thermal array sensor that will allow museum patrons to attempt to locate the infrared-emitting rocks that stand in for signs of life in the exhibit.

The robot was unveiled on August 10, with the help of the Beatty girls, and now takes its place in teaching other young people about robotics and space exploration. Genevieve Beatty expressed high hopes for the robot, saying to SPACE.com:

“It’s a good way for kids to learn about science and robots and space. I learned a lot by building all these robots.”

There’s no doubt Genevieve and her sister have learned quite a bit from their time building robotic rover models. According to the family’s workshop blog, Camille and Genevieve did the majority of the “metal machining, mechanical assembly, electrical soldering, electronics wiring, and other work on the project.” On top of their level of involvement in the project, they have actually built three Spirit-inspired rovers to date. In addition to the New York Hall of Science robot, the girls have constructed a less durable robot for their home and a small model for a museum in Prague. Plus, Camille has been tinkering with electronics, from remote control cars to clocks, since before she started building robots. In her interview with SPACE.com, the 13 year old described the process that brought her to building robots with her father and sister, stating:

You can admire the model rover above, and even visit it if you live near New York City. If you want to hear more about the building process from the two talented young women who were integral to the creation of the new robot, take a look at the video below.

(via The Huffington Post, SPACE.com, Beatty Robotics; thanks to tipster John W.)