Is there a Star Wars equivalent to The Maury Show or what? 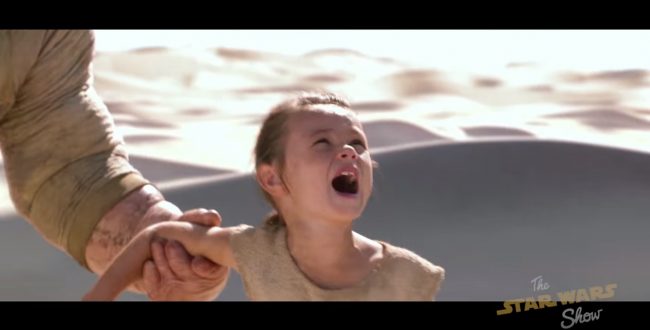 It’s the debate that never ends. It goes on and on my friend…

In a chat with Time Out London, Daisy Ridley mentioned that she thought it was very clear who Rey’s parents were after she watched The Force Awakens herself. Granted, as Rey herself, she might be privy to some context and information that we don’t get as run-of-the-mill audience members. But assuming for a moment that she doesn’t have such information… who could she be talking about?!

When asked about how she thinks she’ll feel after the answer is revealed, Ridley said:

I thought a lot was answered in The Force Awakens. Then after the screening I went for a drink with my agent and everyone, and we were chatting away and I realized that oh, in their minds it’s not answered at all!

I think curiosity is a wonderful thing. And I do find it quite funny that people keep asking about it. Just yesterday a guy asked to take a picture with me and went, “Is Luke your dad?” And I was like, “Chill out, you’ll see!”

So yeah, you know that feeling you get when you’re the only person in the room who knows something that everyone’s excitedly trying to figure out? That’s exactly what I imagine she felt that night.

The thing is, we already know from various interviews that Rey’s parents actually aren’t in The Force Awakens at all. J.J. Abrams went on record to say at least that much, thus refuting many of the more popular theories as to who her parents might be (Luke, Han, or Leia). We’ve all also been promised that the answer as to her parentage would be presented in Episode VIII–you know, just one short year away. (*sob*)

But you know what we get to do? Speculate wildly!

So if Ridley thinks a lot of that was answered but Abrams said that her parents aren’t in The Force Awakens, what does that mean? Well, it could be that Ridley really does have a bit more context, having had access to the script and possibly even the story bible. This means that a lot of the seeds planted in TFA already have clear indications as to their payoff later down the line. Think: “This doesn’t look like anything to me,” a la Westworld, you know?

As well, it could be that Abrams is lying. Well, okay, lying might be too strong of a word. But I figure Abrams for a very clever man, and him saying that her parents aren’t in TFA might actually be a clue if you read that literally. There are plenty of characters referenced or who have otherwise made their presence known but weren’t literally in TFA–Obi-Wan comes to mind (and is my personal “dark horse” theory, just saying).

Whatever the answer is, we’ve got (*heavy sigh*) one year to wait to find out what it might be.