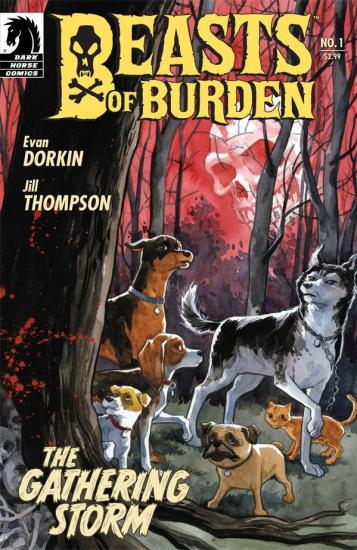 We were excited to hear Evan Dorkin and Jill Thompson’s Beasts of Burden comic was picked up for a film adaptation but since we hadn’t heard any news since 2011 we weren’t sure it was still happening. Well, good news! They’ve attached an Academy Award-nominated director.

Shane Acker, the writer, director, and animator of 9 has been tapped for Beasts of Burden. The film 9 started as Acker’s student project and went on to be nominated for an Oscar in the Best Animated Short category. Tim Burton came along and helped to turn it into a feature length film in 2009.

Beasts of Burden tells the story of a team of cats and dogs who fight supernatural forces to save their human companions. According to the press release:

The project is an animated adventure about the baffling behavior (tail chasing, barking at “nothing” at all) of our favorite four-legged friends. In the charming town of Burden Hill, there might be more to these animal antics than meets the eye. The town is inhabited by the supernatural, and when its paranormal activity becomes even more abnormal than usual, it’s up to a group of fearless canines called the Watch Dogs to protect its citizens – and humanity – from the mysterious things that go “bump” in the night.

Reel FX Creative Studios are set to create a CGI version of this with Andrew Adamson, director of Shrek and The Chronicles of Narnia, producing.

President of Animation Aron Warner said, “Reel FX is continuing to partner with some of the leading filmmakers in animation. Shane is an immense talent and will bring his fresh vision and approach to this adaptation of Beasts of Burden.”

“It’s a pleasure to be working with such accomplished producers and filmmakers on this incredible project,” said Acker. “There is a real independent spirit at Reel FX — the studio is full of energy and fresh ideas — which is necessary to bring this unique story to life.”

Are you a fan of the series?