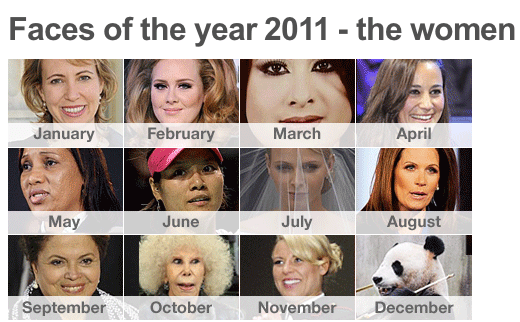 One of these things is not like the other. The BBC has been running two year long series of twelve articles, each one profiling one prominent person of that month’s news. One series was for men, the other was for women from Congresswoman Gabrielle Giffords to Eman al-Obeidi, but it seems like the BBC just couldn’t quite find any notable women from the month of December.

So they profiled a female panda.

Alright, you say, maybe Sweetie, the female panda with the honor of being the BBC’s female “Face of the Month” did something really awesome. Maybe she rescued a child from the bottom of a well, or learned sign language, or traveled to space?

Sweetie, along with her fellow giant panda Sunshine, was welcomed at Edinburgh airport with cheers and bagpipes after the pair’s 11-hour journey from Chengdu in western China. Their arrival is the culmination of five years of lobbying by the Royal Zoological Society of Scotland and the British government. Even the four pilots wore kilts in the pandas’ honour. The pandas are on loan for a decade at a cost of £600,000 per year. Zoo bosses are hoping that Sweetie will produce cubs during that time.

Right. She’s non-autonomous property on loan for a total of $9,231,000. How about Cristina Fernández de Kirchner, the first female president of Argentina, sworn in this month? I mean, if you’re going to make a crappy list, at least abide by your own definitions. It’s the least you can do.

(via The Jane Dough.)