The Cast for the BBC Radio Production of Neverwhere is an Anglophile’s Dream. Can We Get All These People in a Movie Now, Too? 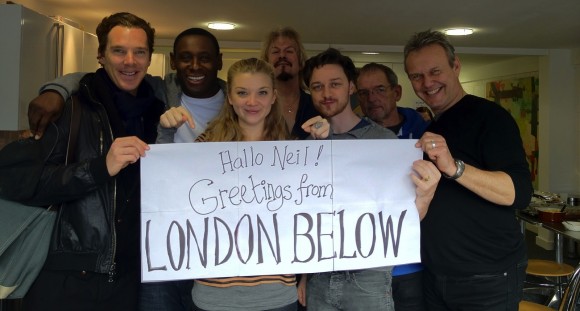 No, your eyes do not deceive you. That is, in fact, James McAvoy, Benedict Cumberbatch, Natalie Dormer, and Anthony Head all in one photo, along with David Schofield (the Pirates of the Caribbean movies), David Harewood (Homeland), and radio drama director Dirk Maggs. And yes, the Neil they’re greeting is Neil Gaiman. That would be because they’re part of the casting lineup, revealed today in a blog post by Gaiman, of the BBC Radio 4 production of Gaiman’s Neverwhere. And the British awesome doesn’t stop there: Also in the cast are Sophie Okonedo, Bernard Cribbins, Romola Garai, and Sir Christopher Lee.

Hypable says that the lineup is “like something from a Tumblr fantasy-casting meme,” and I’d have to disagree, but only because of the lack of Tom Hiddleston. Otherwise that assessment is spot-on.

For those who’ve not read Neverwhere or if, like me, you’ve read it but it’s been a while, here’s a quick refresher: Scotsman Richard Mayhew (McAvoy) finds a girl, Door (Natalie Dormer), alone and injured on the streets of London. Helping her lands him in the underground fantasy world of London Below, where he and Door are hunted by assassins (Mr. Croup and Mr. Vandemar, played by Head and Schofield), protected by the bodyguard Hunter (Okonedo), and given guidance by the Marquis de Carabas (Harewood). Other characters are the Angel Islington (Cumberbatch), the pigeon-friendly Old Bailey (Cribbins), the Earl at Earl’s Court (Lee), and the never seen (if memory serves—like I said, it’s been a while) Jessica, Richard’s fiancée, voiced by Romola Garai.

Gaiman will also lend his voice to the production, presumably as the narrator. The six episodes of the radio play will debut at some point next year on BBC Radio 4; Hypable notes that those outside the UK will be able to listen via the BBC iPlayer, so yay!

On a different note, this solves the mystery of that Neil Gaiman tweet from a few weeks back (“On the good side I was just sent a cast list with James McAvoy, Ben. Cumberbatch, Christopher Lee, Anthony Head and Bernard Cribbins on it.“) that had people wondering what project he could possibly be referring to. Which he didn’t tell us until now. Because he’s Neil Gaiman, and there’s something of the troll about him.