Batwoman Writers Walk Away From DC, Citing Too Much Editorial Interference

The Marvel marketing department must be overjoyed. 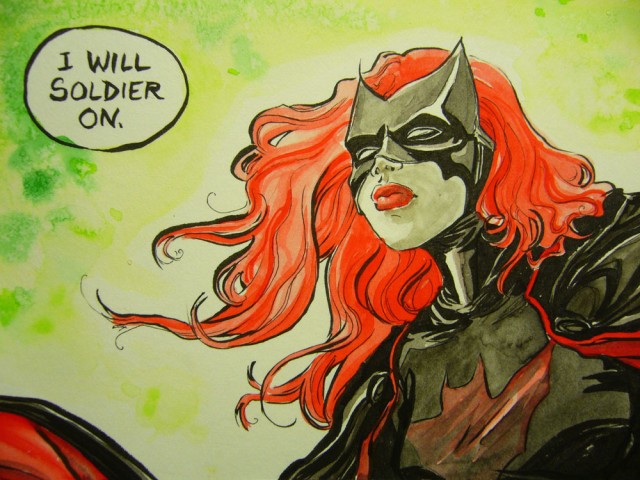 Batwoman has consistently been one of the best titles in comics since it first hit shelves in September 2011. However, as we all know, DC likes to ruin everything it touches. So it’s not surprising (but still soul-crushing) that writers J.H. Williams III and W.H. Blackman are leaving the book due to editorial changes demanded by DC.

The one demand DC made that’s been getting the most heat from critics this morning is, well…

Specifically, they explicitly told the writers of Batwoman that Kate Kane and her longtime girlfriend Maggie Sawyer, to whom she recently proposed in the February Batwoman 17 issue, were under no circumstances to actually get married in the comic.

On his blog (which is currently down due to an overwhelming amount traffic) last night, J.H. William III explained the decision to leave in detail:

in recent months, DC has asked us to alter or completely discard many long-standing storylines in ways that we feel compromise the character and the series. We were told to ditch plans for Killer Croc’s origins; forced to drastically alter the original ending of our current arc, which would have defined Batwoman’s heroic future in bold new ways; and, most crushingly, prohibited from ever showing Kate and Maggie actually getting married. All of these editorial decisions came at the last minute, and always after a year or more of planning and plotting on our end.

We’ve always understood that, as much as we love the character, Batwoman ultimately belongs to DC. However, the eleventh-hour nature of these changes left us frustrated and angry — because they prevent us from telling the best stories we can. So, after a lot of soul-searching, we’ve decided to leave the book after Issue 26

While Williams doesn’t necessarily believe their objections to be based on political problems so much as the comic industry’s general tendency to avoid marriages like the plague — remember how Marvel killed off Gwen Stacey for that exact reason? — it’s still a pretty ugly precedent to set considering the extra social importance that presenting a healthy same-gender relationship and marriage would take on. It’s not like there are that many other lesbians in comic books to begin with — off the top of my head, the only other two that DC’s got are Scandal and Renee Montoya, neither of whom have really broken into the New 52 yet (though I’m pretty sure Scandal gets a mention in the Injustice comics, and Montoya definitely exists in Batwoman… somewhere).

Either way, this is real disappointing news to comic book nerds everywhere:

And don’t think @Marvel is guiltless of this either, Marvel Zombies. Remember #OneMoreDay? #Batwoman

So @DCComics REALLY don’t want Batwoman to have a relationship with a woman but have a statue of Superman and WW kissing. What gives?!?

Time will tell whether or not DC chooses to continue the series with another author behind the helm or if they will decide to end the book entirely. You never know, they might pull a… well, a DC, and hire the writers back like they did with Gail Simone when she was briefly taken off of Batgirl.  You never know with these weirdos.

The Mary Sue will certainly have something up about this controversy as well, so we’re looking forward to hearing their thoughts on the situation as well. UPDATE: Their coverage of the story is now up and just as spot-on as always.