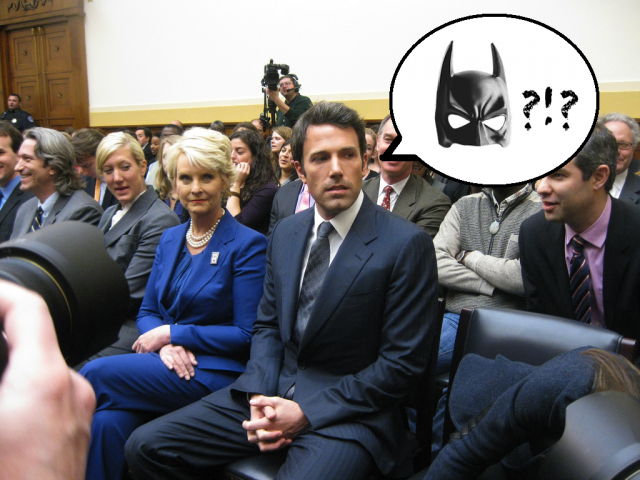 Gosh, remember yesterday afternoon, when the only unusual comic book movie casting choice we were worried about was Bradley Cooper playing a talking raccoon? Little did we know what the Man of Steel 2 “World’s Finest” (yes I’m deliberately putting that in quotation marks, because I’m using it ironically) would have in store for us!

So in case you were like me and decided to step away from the computer for a night to hang out with some real humans, then you probably missed the news that hit the Internet last evening: Ben Affleck has been officially tapped to play Batman in the upcoming 2015 Man of Steel sequel, which will pit Henry Cavil’s Superman against the Caped Crusader. Why? Because:

Hey, listen — Ben Affleck is a pretty decent actor. He’s a great director. Talented guy. No ill will towards him. But if you were going to cast him in a Justice League role, would the Dark Knight really be your first choice? Hell no — Affleck will probably make a great Bruce Wayne, sure, but he’s gonna make a pretty awful Batman. What you do instead is you put him down for Ted Kord’s Blue Beetle, and you throw Matt Damon in there as Booster Gold, and you have them cracking jokes in the corner while a more serious Batman takes center stage. Now there’s an annoyingly A-list DC casting option that I think we can all get behind (though my top choice for Booster Gold is always going to be Ryan Gosling, because c’mon. It’s perfect.)

Now that he’s being played by Ben Affleck, I don’t feel bad that Batman’s parents were murdered.

Man, Ben Affleck is really gonna RUIN the sequel to that movie that you all hated a month ago

Listen, Ben Affleck’s probably not thrilled with all of your choices either.

Okaaaay, I’ll concede to that last one. Poor Ben Affleck. This is going to be like Clooney’s Batman all over again, but hopefully with less uncomfortable looking nipples.

Just remember, though, Internet… it could have been a lot worse.