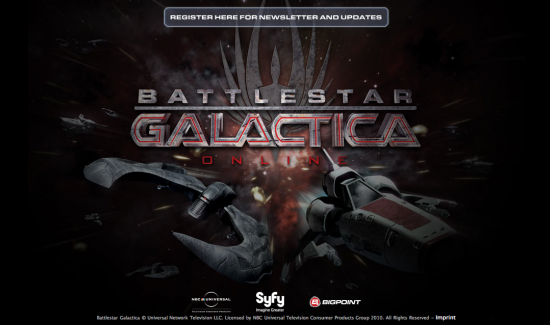 if you didn’t like the series finale of Syfy’s Battlestar Galactica, maybe the new Battlestar MMO will give you a chance to kill Mitochondrial Eve before it all happens again.

NBC Universal and Bigpoint have announced their new MMO based on the television series Battlestar Galactica.  Unlike World of Warcraft or Star Trek Online, the Battlestar MMO will be completely free and browser-based, eliminating the need to buy additional software or pay a monthly fee to play.  We like free.

What will gameplay be like? If you’re a fan of the original series, then you’re out of luck–the game is based on the re-imagined BSG timeline. TheLA Times reports:

“We’re picking a point in the chronology of the series that fans are very familiar with to tell new stories,” explained Bill Kispert, vice president of digital platforms for the partnerships and licensing department of Universal Pictures, which owns the “Battlestar Galactica” rights and made the game deal. “There will be space combat as well as missions and exploration.”

Here’s another juicy tidbit: Players will have the option of playing as Humans OR Cylons.

Bigpoint, a Germany-based game development company, will be spearheading the new Battlestar MMO and have already launched a teaser site.  And how’s this for corporate nepotism: NBC Universal purchased a 35% stake in Bigpoint in 2008.  This type of partnership is definitely the shape of things to come, and my guess is we’ll be seeing even more crossover between between gaming and television marketing.  The Battlestar MMO will be demo’d at the Game Developers Conference in San Francisco this week, which is also where Bigpoint will be opening itsnew US base of operations.  All of you aspiring game designers might want to have a look-see: they’re hiring.

So how long will we have to wait for the Battlestar MMO?  According to NBC’s press release, the game has an ambiguous launch date set for “this fall” and will be available exclusively on Syfy.com for 30 days.  After that, who knows?  I’m sure they have a plan.