Babes Will Love Your Battery-Powered Batmobile 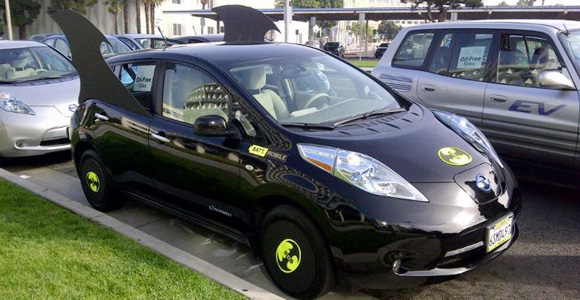 It’s the car, right? Chicks dig the car. And more to the point, if she’s an environmentally friendly chick, she’ll really dig this car. It’s a battery powered Batmobile, or BATT-mobile if you prefer.

A man known only as Dave and his twin brother created the BATT-mobile for National Plug-In Day two weeks ago. The car was part of a parade showcasing all sorts of electric cars in Santa Monica, California. Organizers of the event only suggested adding things like streamers to the cars but the brothers decided to go all out. “I asked the organizers if we could just decorate it like the Batmobile and they said, ‘Great!'” Dave said in this Facebook video.

The BATT-mobile (the brothers came up with the pun themselves) is really a Nissan LEAF decked out with bat fins and bat symbols throughout complete with a battery image in the center to prove it’s energy efficiency. “My brother and I are, you know, artists so we like to draw so we drew these shapes out of cardboard and foam and all that stuff and it’s all put on here with magnets,” he said. Dave uses the car, sans its batty attachments, to commute to work and had nothing but great things to say about it.

Previously, Batmobiles were only known to run on gas, jet fuel and turbine power. Do you think Bruce Wayne will ever make the switch to electric? Yeah, we don’t think so either but I would totally cruise around town in one of these.