Did Batman Wet His Pants?

Blame Kevin Smith: The sixth issue of Batman: The Widening Gyre, a twelve-part, official DC miniseries written by the Clerks director and illustrated by Walt Flanagan, features this charmer of a panel, which etches Batman’s avowed bladder spasm in the annals of comics history. What’s worse, this is actually a flashback to Frank Miller‘s path-setting Batman: Year One — to Batman’s pivotal first speech to the corrupt gangsters who control Gotham, which TVTropes identifies as the comic’s “Crowning Moment of Awesome.” Not anymore. 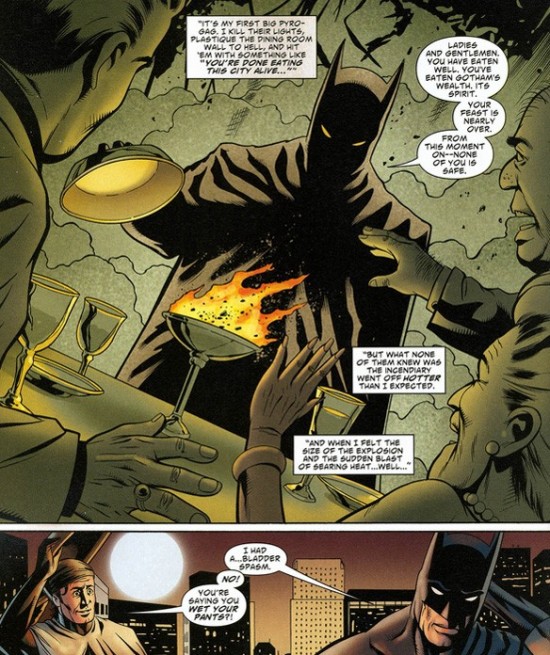 Aside: Batman’s secret love child with Superman on the moon is not yet canonical.

Comics fans being what they are, the pants-wetting throwaway line has inspired a fair amount of controversy:  It’s unclear whether this is official series canon or merely fanon, an imagined filling-in of past events by a fan writer (Smith) which isn’t yet officially a part of the series universe. After fans started complaining to Smith in the wake of ComicsAlliance‘s takedown of Batman: The Widening Gyre #6 that exposed the alleged bladder malfunction, he struck back by saying it was just a joke: 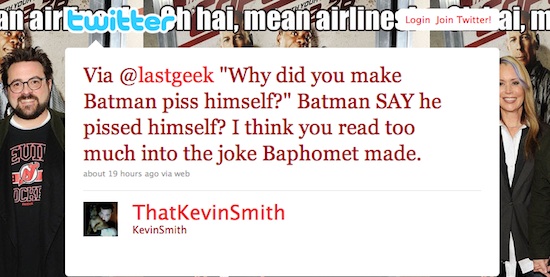 But that doesn’t seal the deal: Does Kevin Smith’s tweet rechange whatever changes in the Batman universe might or might not have been wrought by this aside, since the tweet itself didn’t occur within the pages of a DC comic? Is Batman’s joke about bladder spasms canonical, even if said pants-peeing event is not? Some Topless Robot readers have actually cottoned up to the idea of Batman joking about peeing his pants or even to his actually doing so, on the grounds that it humanizes him and takes him down a peg or two from the overserious, self-importantly badass figure his naysayers say he cuts now. But daring, funny, or neither, Smith’s foray into the holiest holies of Batman lore has definitely left some fans … pissed off.