Batman is Pregnant. And on the Moon. And Superman is Listening to his Unborn Child. 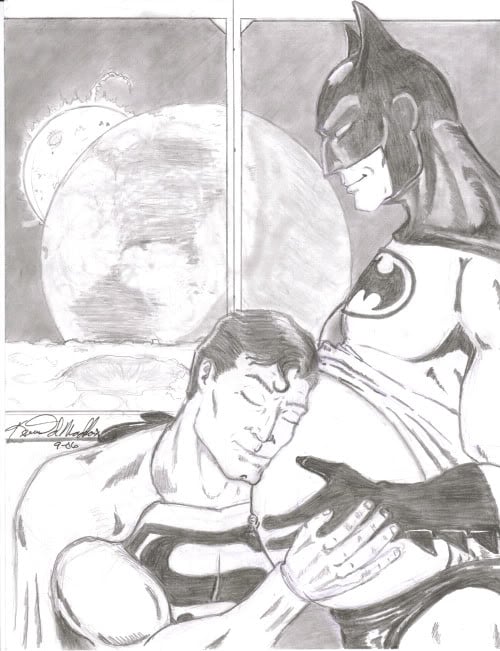 That about sums it up.

We can’t say it any better than Redditor DarkBlueAnt, who wins the Internet:

See, here are the problems that I have with this image (As a nerd):

1. Batman can’t lift his costume over his stomache like that. It’s made of Kevlar.
2. Batman can’t breathe on the moon.
3. The sun is illuminating half of the back side of Earth.
4. The sun is too large. If it’s supposed to be a red sun, then Superman should have retired the uniform and it should engulf Earth.
5. Superman is pressing up against Batman to hear the baby. He has super hearing and should not need to do this.
6. Batman no longer wears his logo like that.
7. Batman wouldn’t even bother being Batman if he were pregnant. Notice the lack of utility belt? He’s not prepared to do superhero work.
8. Batman is a man.
9. Batman’s breasts are not swelled.

We’d love to know a source for this — there are no TinEye results, and the signature appears to say “Kevin D. Maddox” or “Kevin I. Maddox,” neither of whom we could find any record of on Batman pregnancy fanfic forums or elsewhere. Internet, please help!