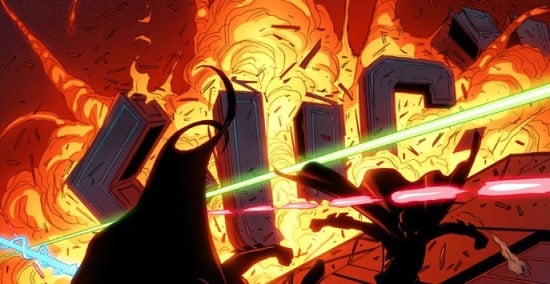 This is part of what is apparently a cover of one of the upcoming Bruce Wayne: The Return Home books, featuring Batman and Robin jumping off a building, away from an explosion. Also, somebody is shooting lasers at them.  Well, one of them looks like it might be a freeze ray.

(It’s the spiraling secondary ray that gives it away.)

Oh, and there are some giant letters that look like they used to spell out the f-word.

Subliminal commentary on the state of Batman continuity post-Grant-Morrison?  I wish.  Entirely innocent mistake?  I’d be surprised.  Part of a sentence spelled out by the rest of the covers, excoriating DC’s new editor in chief (as suggested by Bleeding Cool forumers)?  Hilarious, but unlikely.

Bound to get some attention and/or swift editing, not unlike another foul mouthed Batman story?  well, DC has already removed the image from their website.  I’m making popcorn as we speak.