Barbara Gordon Returns as Oracle in The Oracle Code

The graphic novel returns a beloved character to her grateful fandom.

DC Ink just dropped the trailer for their upcoming graphic novel The Oracle Code, which features the return of a disabled Barbara Gordon, aka Oracle. Written by Marieke Nijkamp (This Is Where It Ends) with art by Manuel Preitano (Wonderland, Destiny, NY), The Oracle Code follows a young Barbara Gordon as she tries to solve her very first mystery.

“After a gunshot leaves her paralyzed, Barbara Gordon enters the Arkham Center for Independence, where Gotham’s teens undergo physical and mental rehabilitation. Now using a wheelchair, Barbara must adapt to a new normal, but she cannot shake the feeling that something is dangerously amiss. Within these walls, strange sounds escape at night; patients go missing; and Barbara begins to put together pieces of what she believes to be a larger puzzle.

But is this suspicion simply a result of her trauma? Fellow patients try to connect with Barbara, but she pushes them away, and she’d rather spend time with ghost stories than participate in her daily exercises. Even Barbara’s own judgment is in question.

In The Oracle Code, universal truths cannot be escaped, and Barbara Gordon must battle the phantoms of her past before they swarm her future.”

The trailer was released on March 1st, which is also International Wheelchair Day, where wheelchair users celebrate the positive impact a wheelchair has on their lives. It is a fitting day for the return of DC’s most famous disabled superhero, whose absence has been deeply felt by her fandom. March 1st is also the Disability Day of Mourning, which remembers disabled individuals who were killed by their families or caregivers.

The fact this dropped on #DisabilityDayOfMourning and Barbara Gordon is looking into nursing home/rehab hospital abuse is NOT lost on me. So excited for this. https://t.co/f1Cj0R5s3O

Nijkamp said of the novel, “The Oracle Code is my love letter to Barbara Gordon, to Oracle, … It’s a book for everyone who’s ever felt like the puzzle pieces don’t quite fit, whether they’re in a creepy Arkham institute or simply figuring out themselves. And it’s for every disabled reader who knows they can be a hero too.”

And now, a brief history on Barbara Gordon and why her return as Oracle is deeply moving to so many. Barbara Gordon/Batgirl, daughter of Gotham City police commissioner James Gordon, was created for the 1960s Batman television series in an effort to appeal to female audiences. She debuted in the comics around the same time, with her first appearance in Detective Comics #359, “The Million Dollar Debut of Batgirl” (1967).

In Alan Moore’s 1988 one-shot The Killing Joke, the Joker shoots Barbara, paralyzing her from the waist down in an effort to drive Jim Gordon insane. It was a textbook example of fridging a female character, i.e. killing off a woman to further a male character’s story.

Then, something marvelous happened. Comic book editor and writer Kim Yale and her husband/comic book writer John Ostrander revived the character and turned Barbara Gordon into Oracle, who relies on her brilliant mind, her hacking skills, and her training in library sciences (hell yes librarians!) to become Gotham’s biggest information broker. In doing so, they gave DC its first disabled superhero, in a watershed moment for disabled representation.

Barbara as Oracle went on to lead the Birds of Prey and have all sorts of heroic adventures, all while using a wheelchair. But when the New 52 happened, Barbara underwent experimental surgery in South Africa and regained her ability to walk. Just like that, Oracle was over and Batgirl was back.

Audiences were split on the decision: while many mourned the loss of disabled representation, others wanted to see Barbara return in full force as Batgirl. And while there have been multiple Batgirls, there is only one Oracle, and the loss of a wheelchair-using heroine was deeply offensive to many fans. 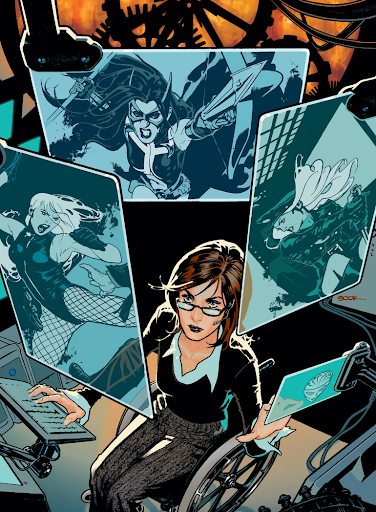 The Oracle Code comes out on March 10th. What do you think of the return of Oracle?