“Would You Like A Pregnancy Test With That Beer,” Says One Minnesota Bar 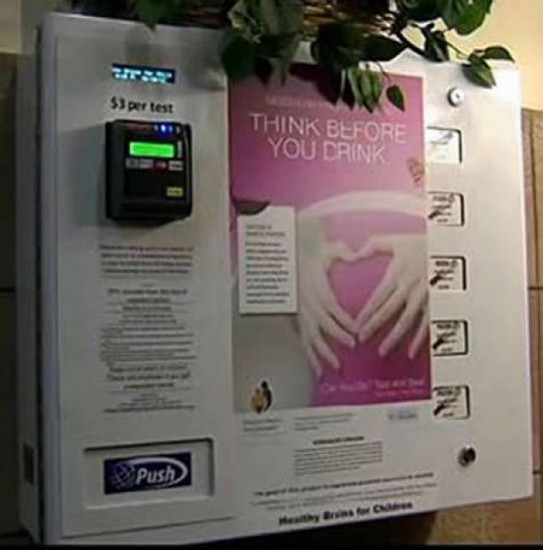 Upon hearing there’s a bar that offers pregnancy tests in the bathroom, you might think they’re trying to make some really terrible joke about taking someone home after a few beers and having unprotected sex. In actuality, they’re concerned with women who had sex before stepping into their establishment. That’s right. One Minnesota bar wants to prevent you from drinking while you’re pregnant. Thanks for the concern, I guess?

“Pub 500, a Mankato, Minn. bar located south of Minneapolis-St. Paul, has installed a new pregnancy test dispenser in the women’s restroom,” writes the NY Daily News. “Before ordering a drink, women can access pregnancy tests for $3 with a credit or debit card.”

Healthy Brains for Children, a non-profit organization aimed at preventing brain damage from prenatal exposure to alcohol, are the ones who placed the world’s first pregnancy test dispenser in a public restroom. It’s part of their “Think Before You Drink Initiative” and the money made from the machine goes directly to them. They write:

Healthy Brains for Children seeks to locate pregnancy test dispensers in women’s restrooms in bars, gas stations, malls, fitness centers, etc. to target those at high risk for unexpecting pregnancies. The intent of the Pub 500 event was to plant an entrepreneurial seed and find partners in this initiative to put pregnancy tests worldwide in locations where women can test before drinking alcohol rather than waiting until a month or two into the pregnancy.

While countless studies have been done about the dangers of alcohol period, results vary (sometimes from week to week, it seems) about what is ok and what isn’t when you’re pregnant. Not to mention women make their own judgements about what is and isn’t acceptable for them personally during pregnancy, e.g. though some studies say a glass of wine now and then is perfectly fine, some ladies prefer to steer clear completely just to be on the safe side and some ignore studies altogether.

I’m really not sure what to think about this. On one hand I guess it’s a smart idea, for women who are not just concerned they might be pregnant but cautious about the effects of alcohol on their child. On the other, I think it’s another in a long line of weird, overly-personal intrusions. And perhaps the organization and those who are thinking about installing the machine should also consider putting a condom machine in the women’s restroom right next to the pregnancy test dispenser to, you know, prevent the “oh crap, I might be pregnant, let me check before I drink” thing entirely. But pregnancy/alcohol consumption concerns aside, it’s a good idea in my mind simply for ease of purchase. There are a lot of women and girls who feel too self-conscious to purchase a test over the counter and this is a simple solution to that problem.