Allow Us To Explain: Bane 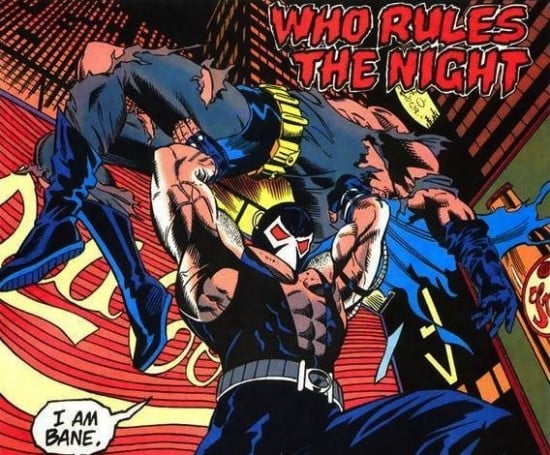 I’ve been looking forward to this article ever since it was announced that Bane would be appearing in The Dark Knight Rises, and not just because the title rhymes.  I’ve been looking forward to it because Bane is awesome, and not many people outside of comics fans have much of an idea of who he is.  This is because his appearances in media outside of comics and cartoons have been pretty much limited to two: he was an almost unnoticeable tertiary badguy in that movie-that-shall-not-be-named Batman & Robin, and he was the first boss fight in Batman: Arkham Asylum.

But there’s much more to Bane than just “the Mexican wrestler guy who’s on steroids,” so allow me to explain why he makes my short list of awesome Batman villains that most people don’t even know exist.

The common misinterpretation of Bane is that he is exactly how he is portrayed in Batman & Robin: a mook.  A strong man.  Big muscles, tiny brain.

This is exactly half-right.  Here’s the deal with Bane:

Bane’s father was convicted and sentenced to life in prison by the courts of Santa Prisca (a made up autocratic Caribbean island), but fled the country before he could be interred in La Peña Dura, Santa Prisca’s Chateau d’If.  This was not a problem for the Santa Priscan courts, and they did what they usually did in these circumstances: they transferred the sentence to the criminal’s offspring.  This was only slightly complicated by the fact that Bane hadn’t actually been born yet.  His pregnant mother was carted off to La Peña and imprisoned there to birth and nurse him.

It should be no surprise that she died when Bane was still quite young.  When he was eight, in an effort to ingratiate himself with a relatively benevolent inmate by performing a requested favor, Bane stabbed a sleeping convict more than three dozen times, murdering him.  He was sentenced to solitary confinement until he reached the age of eighteen, in a cell that filled to the ceiling grate with water at each high tide.  Bane took this opportunity to teach himself to swim.

Throughout his childhood, Bane had a series of recurring dreams in which an older version of himself appeared to him and essentially told him that he was going to grow up to be the baddest motherfucker in the world… except for this terrifying spectral bat-demon.

This dream was given clarity when a native of Gotham City wound up in La Peña Dura, and told Bane all about the Batman, which was also was right about the time that Bane was made the primary test subject for an experimental steroid code-named Venom.  Sensing that his destiny lay more than a thousand miles north, Bane broke out of La Peña, his Gothamite buddy in tow and the secret of Venom’s manufacture safe in his head.

At this point, Bane is roughly twenty years old, at most no older than the first Robin.  He arrives in Gotham city, watches Bruce Wayne get out of a car and walk into a society event and deduces (based on his observations of Batman and how Wayne carries himself) that Batman and Bruce Wayne are the same person.  Then he and a small gang steal a bunch of shoulder-fired surface-to-air missiles and use them to break large holes in Arkham Asylum.  Police and the Bat-family are at a loss: they have no idea who this gang is led by and they prove incredibly elusive, leaving behind only a trail of dead prostitutes who someone appears to have murdered with his bare hands.

Bane waits for Batman to exhaust himself cleaning up the entire Rogues Gallery at the same time, and when he decides the time is right, he breaks into the Batcave through Wayne Manor.  After a night spent defeating the Joker and the Scarecrow working in tandem and (relatedly) escaping from a flooded commuter tunnel with a terrified civilian in tow, Batman stumbles back home to collapse, only to find a man he has never seen before standing in his cave.

Bane beats him up, and snaps him in half.  Then he brings Batman’s body to the middle of Gotham, throws him off a three-story building, and proclaims to the horrified onlookers that he rules Gotham City now.

In 1992, Superman fans got the death of Superman.  In 1993, the Knightfall story arc was essentially the death of Batman.  Writer Chuck Dixon hammered home the point that Bane had succeeded where no foe had before by breaking Batman emotionally as well as physically.  It was beside the point that Batman couldn’t fully recover from his injuries.  He didn’t even want to.

(The story of how Batman regained the use of his legs is long, weird, and… well, stupid, in the way that most attempts to retcon a permanent situation are.  It did, however, pave the way for a whole story arc of Batman fighting ninjas and Lady Shiva, which kind of made up for it.)

So that’s the deal with Bane.  Since Knightfall, Bane has become a considerably less evil character, having his butt later handed to him by a couple of different Batmans, surviving Venom withdrawal and swearing off the drug, going on a worldwide search for his father, making himself a formidable enemy of Ra’s al Ghul, and settling into a sort of true neutral alignment.

The half that other interpretations of Bane have missed is that he is a genius.  The only villain to ever completely (if temporarily) defeat Batman, at about two decades of age, after escaping from prison for the first time less than a year before.  He has a place on a very short list of people who have figured out, using only their own brains, that Batman is Bruce Wayne.

Bane in The Dark Knight Rises

And so the more I think about Bane in The Dark Knight Rises, the more excited I get, frankly. Why would you cast Tom Hardy to play him if you weren’t going to take advantage of the intellectual aspects of the character?

And if The Dark Knight Rises followed the plot of Knightfall, I might die of happiness, because then we might get to see the conclusion of the story, Nightsend, which would take us right back to the thing that made Batman Begins so fun: ninjas.

Lots and lots of ninjas.

I’ve described the training regimen (if it can rightly be called that) that Batman uses to get back in shape after Knightsend in an old post of ours called The 15 Best Exercises from Training Montages.

Back in the early nineties Bruce Wayne had to take a break from being Batman due to spinal injuries, and when he came back he had to train hard enough to be able to take the costume back from the guy he had left it with, who had gone completely insane in the interim. How?  Well, he’s Batman.  Some sit ups and a few laps around the track aren’t even in his vocabulary.

He went to Lady Shiva, the greatest assassin in the world, and got her to train him. Shiva really wanted to fight Batman, but she considers anyone who hasn’t killed someone in combat to be unworthy of her. So, she tries to trap him in a situation where he has to kill. Here’s how:

She puts on the mask of a Japanese bat demon. She kills an armless ninja master (“This is how one kicks!”). Then she gives Batman the mask, and lets the master’s seven greatest students track him down. Batman is eventually forced to fake killing one of them in order to keep Shiva from sending yet another after him, which only results in Shiva informing him that now they can fight for real and she will do her best to kill him. Someday. When he least expects it.

And Christopher Nolan could really go very far with his Batman returning to what is left of Ra’s al Ghul’s organization to whip him back into shape.  There’s still one more female lead character to be announced in the movie.  Talia al Ghul has been a popular supposition, but what if it was Lady Shiva?

But even if Bane isn’t the main villain of TDKR (or even a villain.  He could very well be a neutral secondary character!) it will be great to see his intelligence given justice in a mainstream adaptation of him, even if he’s just an underling to Hugo Strange, who still holds the “most solid and persistently rumored villain” spot.

Additionally, it’s worth pointing out that all of the new characters that are officially or strongly rumored to appear in TDKR (Selina Kyle, Bane, and Hugo Strange) are characters who know Batman’s secret identity.  Just food for thought.

I like Tom Hardy and I have a lot of faith in Christopher Nolan, but seriously: Bane is Hispanic.  There is no getting around it.  He’s from a Spanish named Caribbean island and speaks Spanish as his first language.  Bane is a person of color.  Nolan got a pass for casting a white guy (and technically also two Asian guys) as the completely Arab Ra’s al Ghul when he re-characterized the Demon’s Head as a man who cultivates an image of immortal mysticism that has little connection to his actual person. This is his second opportunity to utilize one of the few non-white villains in DC comics, and I would have expected better.