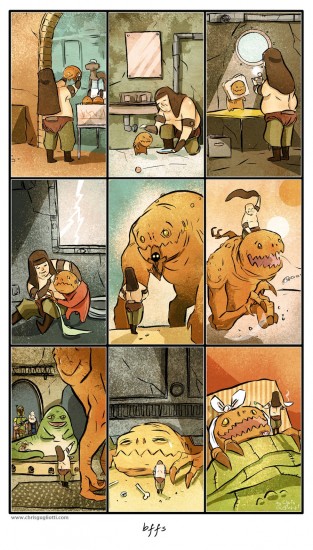 I’m sure we all know that the actual origin of the Rancor was that it broke out of its bonds during transit to the Tarsunt system, causing the ship it was on to crash land on Tatooine, killing its crew, was recovered by Bib Fortuna and presented to Jabba the Hutt as a birthday present, earning Fortuna his post as Majordomo. But this origin has tiny Rancor longjohns and breading, and the Rancor surviving and being fed soup by its keeper Malakili, so I deem it the superior one. It was drawn by Chris Gugliotti, and is available as a print here.