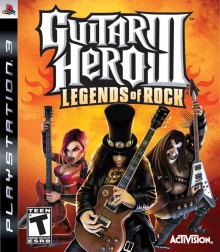 Not content to just let old feuds die, Axl Rose, singer of the famed rock band Guns N’ Roses, is now suing Activision for $20 million over licensing terms regarding a deal that supposedly granted Activision rights to use “Welcome to the Jungle” in Guitar Hero III only if former band member Slash didn’t appear in the game. Well, as everyone can plainly see from the game’s cover, Slash appeared pretty prominently in the game.

Not only did Slash appear on the game’s cover, but he also appeared in the game as what was essentially a boss battle, as well as wrote original music for said battle. Even though the terms Axl asked for may seem like a childish move that may or may not include the words “neener neener,” he claimed he didn’t want Slash in a game with a Guns N’ Roses song because Slash is no longer in the band and needs to stop being associated with the band; something which actually makes a lot of sense from a marketing standpoint.

Axl reportedly filed six actions against Activision, including breach of contract, fraud, negligent misrepresentation, and unjust enrichment. Radar Online managed to snag the official court documents, click on the link on their page to download a .pdf.

With Guitar Hero III’s release being nearly three years ago, one has to wonder what took Axl so long to get this lawsuit started, or just how effective Activision’s stall tactics really are.