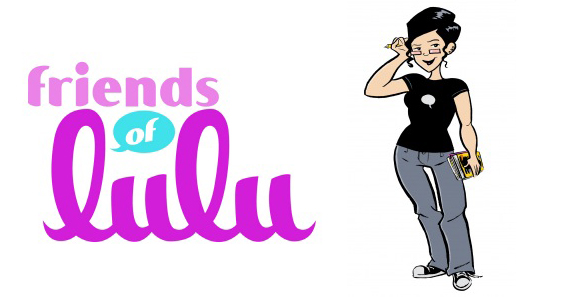 Women and comics, women in comics, women of comics, however you want to look at it, they’ve been a big topic of discussion over the last year. Several sites (The Mary Sue included) like to spotlight female creators and issues in the industry when at all possible and one blog thinks it’s time to reinstate awards for the talented women out there. And yes, this is something we fully endorse.

Sue from the DC Women Kicking Ass blog, recently wrote about Friends of Lulu. The now defunct non-profit organization was created to promote and encourage female readership and participation in the comic book industry. It was around since the early 1990s but started to waver at the end of 2010 when their current president, Valerie D’Orazio, couldn’t keep it going almost single-handedly. Volunteers attempted to keep it going but in 2011 it was confirmed Friends of Lulu was no more.

Comic writer and artist Trina Robbins was one of the co-founders of Friends of Lulu along with journalist Heidi MacDonald and publisher Deni Loubert. The organization got its name from Little Lulu, the comic strip character created by Marjorie Henderson Buell in 1935. Through the years, Friends of Lulu administered a Women Cartoonists Hall of Fame, provided educational and research material about women in comics, input to publishers, retailers, and the public on the kinds of comics that appeal to a female readership and on how to reach that readership, facilitated networking opportunities for females in the comic book industry, make mentorship connections and other helpful services and programs. But one of the things the organization was known for was their annual Lulu Awards.

They started off small but eventually the awards were presented annually at Comic-Con International in San Diego. They included recognition in a hall of fame, women of distinction, Lulu of the year, volunteer of the year as well as the Kim Yale Newcomer award. Kim Yale was the creator who, along with her husband John Ostrander, was responsible for turning Barbara Gordon into the information broker Oracle after she was shot and paralyzed by the Joker. They introduced her in DC Comics’ Suicide Squad and then Yale told her story in Oracle: Year One. Yale was also a Friends of Lulu board member until her death from breast cancer in 1997. Past recipients of the Kim Yale Newcomer award include Kate Beaton, Kathryn Immonen, Devin Grayson and Carla Speed McNeil.

And it’s this award in particular Sue from DCWKA does not want to see fall by the wayside. She writes, “I hate to see an award that honors and remembers a vital creator like Kim Yale no longer exist. While one can debate whether there is still the need for an organization like Friends of Lulu, recognizing and encouraging new female creators – especially in light of the discourse that’s gone on in this market this past year – is, I believe, still very important.”

Sue doesn’t have any particulars as to how this could be achieved at the moment but is offering to volunteer in any way and is hoping to get some industry support by writing about it. “For the award to exist it will also require the support and involvement of organizations far larger and influential than mine,” she wrote. “It needs creator and publisher support, publicity and access to a database of industry participants. It could be hosted separately by one of the comics sites or it could be folded into an existing set of awards such as the Eisners. Or it could simply be open to voting by the comic community. As long as it is supported and treated with respect, I don’t think it matters.”

We agree with Sue’s sentiments and hope our own post with further the effort. There certainly isn’t any shortage of newcomers to choose from, just flip through the pages of the upcoming Womanthology and you’ll find a slew. Personally I think the Eisner Awards (also held annually at Comic-Con) would be the perfect home for the Kim Yale Newcomer award.