Avengers: Infinity War Gets 4 Gorgeous Covers—and We Get Some Big MCU News 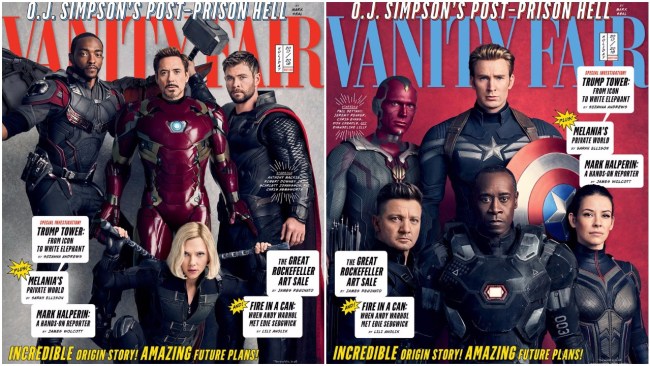 Infinity War isn’t out until May, but if anyone knows how to ramp up the hype machine, it’s Marvel. All of our favorite superheroes are featured in a spread of four Vanity Fair covers, and the featured story, “Secrets of the Marvel Universe,” guarantees we’re going to click.

The sprawling cover story on Marvel’s spectacularly successful 10-year run since Iron Man in 2008 is well worth reading for fans of the MCU. For our purposes, however, I’m going to focus on the article’s confirmation that we’re going to be losing more than one of our favorites by the time Avengers 4 takes its final bow (we also learn that 4’s title is a secret because it is a spoiler). We might lose almost all of our old favorites.

After Avengers 4, an ambitious multi-franchise crossover movie slated for release in 2019, at least some of the original characters who sit at the center of the billion-dollar Avengers team will be hanging up their capes and shields. That’s partially because the Marvel contracts with the actors who play them—Evans (Captain America), Ruffalo (Hulk), Downey (Iron Man), Johansson (Black Widow), Hemsworth (Thor), and Renner (Hawkeye)—are coming to an end.

While we always knew we’d be letting go of at least one major character post-War (my money’s on Chris Evans’ Steve Rogers, though my heart weeps about it), the VF story seems to imply that an even larger chunk of the original Avengers team could depart. (Contract extensions were always possible.)

It’s understandable why some would choose to leave regardless of money offered: many of these actors are now the biggest movie stars in the world, and they’ve been playing these demanding parts for nearly a decade.

I err on the side of never saying never again, however: Downey is now an institution unto himself and will likely come and go as he pleases, and of course, in a world of super-powered people, resurrections and cameos are always possible for the rest.

But the story really drives home how thoroughly Infinity War and Avengers 4 are going to wrap up this stage of the Avengers:

While [Marvel Studios president Kevin] Feige refused to reveal any details about the characters and stories Marvel has yet to introduce, he did promise a definitive end to the franchise that built Marvel. Avengers 4, he said, will “bring things you’ve never seen in superhero films: a finale.” This may mean a lot of dead Avengers at the hands of the villain Thanos, who has appeared sporadically and tantalizingly since the first Avengers movie back in 2012. But the Marvel Cinematic Universe will live on. “There will be two distinct periods. Everything before Avengers 4 and everything after. I know it will not be in ways people are expecting,” Feige teased.

(Teresa has more here on what that means for Marvel’s direction—including, hopefully, a hell of a lot more focus on the ladies and diversity across the board.)

It appears from Feige’s teasing that we really will be getting a comprehensive “finale” and an end to the first distinct period of the Avengers as we knew them. And that’s not a bad thing: in fact, it’s the very thing that could revive the franchise that began to feel long in tooth with Age of Ultron and even Civil War, which I generally refer to as The Avengers Guest Star In Iron Man 87 for all that it’s meant to be a Captain America film.

Bring us more movies that feel experimental and fresh like the tongue-in-cheek and psychedelic Thor: Ragnarok and fewer movies like Thor: The Dark World. Give us Black Panther and more Black Panther. Make Captain Marvel great. And then give us the Lady Liberators.

Anyway, let’s take a look at the Vanity Fair spread, because it’s awesome, and it may be one of the last times we see these folks all gathered together for such a purpose. Can we extrapolate anything about Infinity War and onward based on costume and appearance alone? You know I’m gonna try! 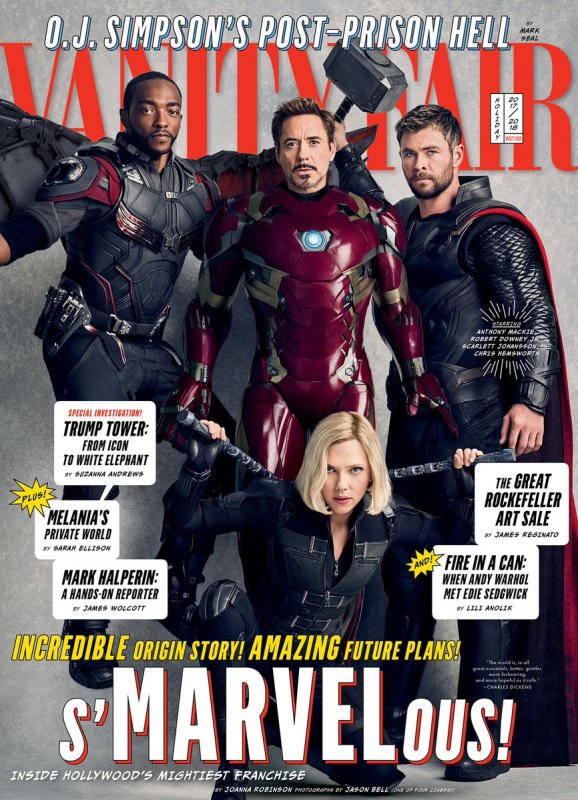 I’ve already talked about my love for Falcon and Black Widow’s new looks, so let’s take a gander at my boy Thor. He’s wearing the dark black armor that he rocked in the first Ragnarok post-credits scene when the ship carrying what’s left of Asgard suddenly seems very much imperiled by Thanos.

Intriguingly, though, Thor has his hammer Mjölnir back, even though it was quite thoroughly crushed by Hela in Ragnarok. Maybe Vanity Fair just wanted Thor to be wielding his most recognizable signifier, but I don’t think so—the styling for the shoot seems extremely careful and specific. Thor also appears to have his eye restored (also lost to Hela). This indicates to me that something happens in the next two movies that will allow Thor to regain both eye and hammer. Considering that the Infinity Stones can bend the rules of time, space, and reality itself, this could be pretty easily accomplished. And I am ready for it.

I would also point out that since Anthony Mackie’s Falcon is front and center on this cover with some of Hollywood and Marvel’s biggest guns (and featured prominently behind Steve in other promos), I’d like to put a wager on Sam Wilson taking up Cap’s shield instead of Bucky Barnes. The Winter Soldier is in the broader photo shoot, but he doesn’t get to be on a cover, which both annoys and intrigues me. Is it that he’s still not considered a “hero” in the traditional sense? 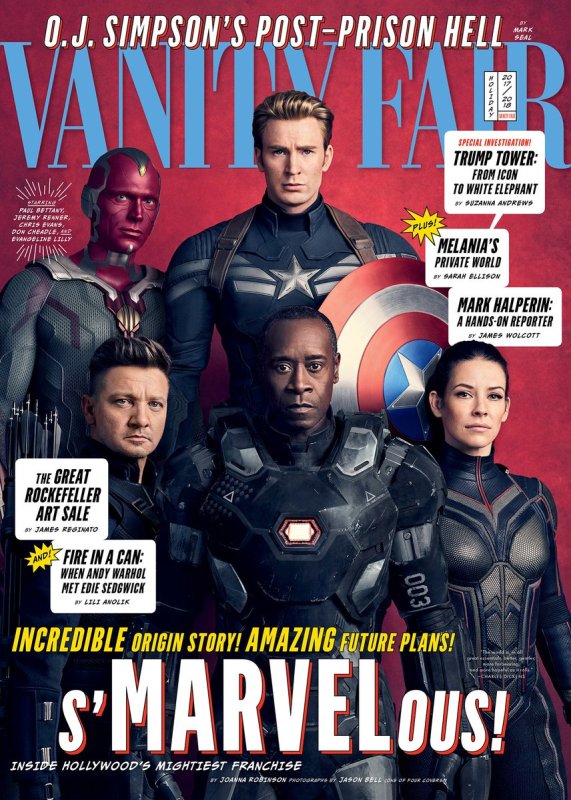 The most significant costume on this cover is worn by Evangeline Lilly—fully suited up as the Wasp for the first time!!! She looks fantastic and I am all about it (Ant-Man and the Wasp is slated for July 8th, 2018). I love the strong, bold lines of the Wasp suit and how awesomely not-sexualized it looks here. Zero cleavage! It’s a pre-Christmas miracle. We also have Don Cheadle seemingly back in action as War Machine, and it will be interesting to see how the movies deal with the injury he received in Civil War.

The picture spread that goes with the article shows Linda Cardellini as Laura Barton, so theoretically we’re going to be seeing more of Hawkeye’s family that we met in Ultron. And Chris Evans’ Cap appears to be wearing what looks like the flight suit he wore in the opening scene of The Winter Soldier, which Chris Evans has been pretty vocal about liking a lot, so maybe they brought that back? Steve also has the shield that he laid down at the end of Civil War, and since he’s gone Nomad, I’ll be very interested to see if and when they get him to pick that back up.

As for Vision—my guy, I’m a little worried about you, since the yellow infinity Mind Stone is lodged in your forehead and is keeping you going. Thanos is, uh, gonna need that. 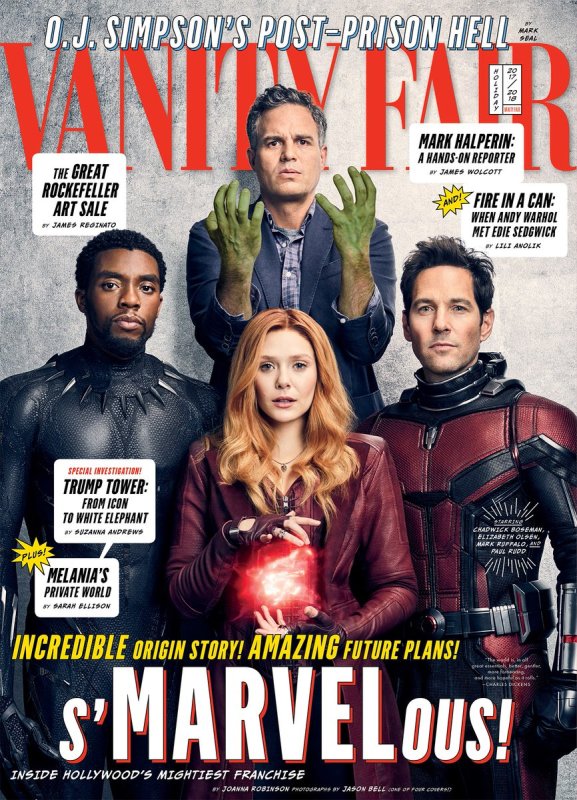 Every single person looks perfect here and they can all stay for tea. 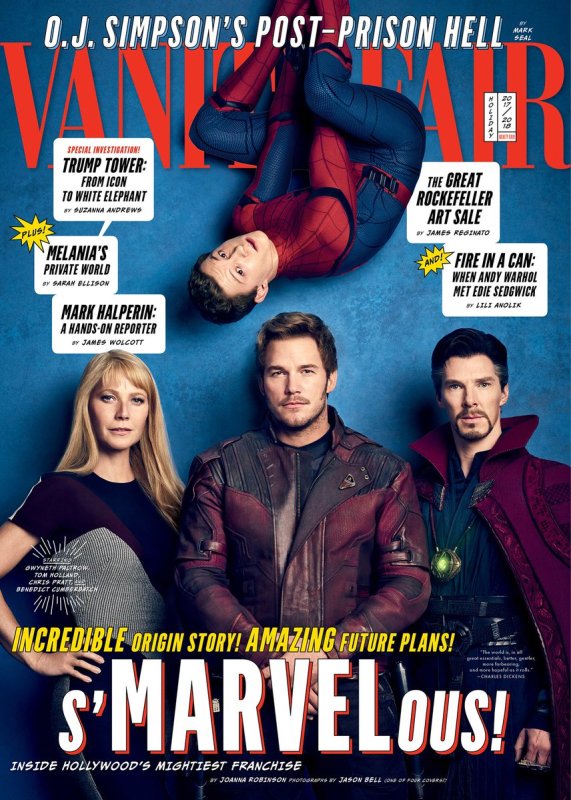 This cover is my least favorite and seems strangely dissonant to me. Most glaringly, it’s the only one that doesn’t feature a person of color, which would have been so easily fixed: why not Zoe Saldana’s Gamora instead of Gwyneth Paltrow’s Pepper Potts? Is Pepper really more recognizable or important as a hero than Gamora? Why not include them both?

Otherwise, this is largely a matter of taste, and for me, these are some of the heroes I am least invested in. Tom Holland gets lots of points for his Spidey pose and for the best lip-sync of Rihanna’s “Umbrella” of all time, but otherwise, you can rest assured that this is not the edition of Vanity Fair that I would purchase. Some things to consider: this seems to indicate that Pepper will likely play an expanded role in the next two movies. Also, Dr. Strange is flaunting that Eye of Agamotto, a.k.a. the green infinity Time Stone, and, uh, Thanos is really gonna want that too.

Click through to Vanity Fair to see more of our faves and supporting faves suited up for action. The story, with its intricacies of the ups and downs of Marvel Studios, is worth your time. While I very much wish we could have had more women and people of color (more specifically, women of color) featured on the covers, the spreads inside are fantastic.

It’s clear that the cover shoot was meant to show the biggest heroes and stars that have emerged from the MCU. I look forward to the day when their next stage includes a whole lot more variety. Those covers I will collect.