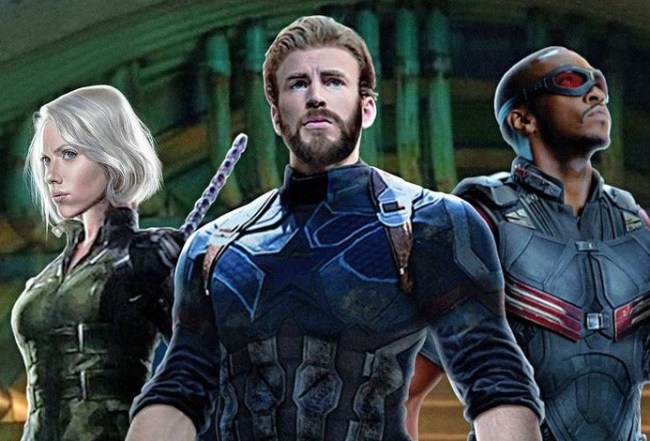 The first Infinity War poster gave us a glimpse of Chris Evans’ Cap rocking a full nomadic beard and a dark blue suit. Now new promotional art gives us a better view, plus some strong new styling for Black Widow and Falcon.

Steve Rogers’ misfit band of rebels who are fighting the good fight—listen, I’m Team Cap all the way—ostensibly now consists of himself, longtime ally Natasha Romanoff (Black Widow), current best pal Sam Wilson (Falcon) and old best pal Bucky Barnes (The Winter Soldier), who was back in a cryogenic freeze last we saw him in Civil War.

T’challa (Black Panther) is at least likely sympathetic to Cap’s effort, since he’s harboring Bucky, and may be instrumental in giving Bucky a new arm through Wakandan technology (I don’t exactly see Tony Stark stepping in to help Bucky out there, even if everyone kisses and makes up to take on Thanos). Fans haven’t been able to spot Ant-Man in the poster, though he fought on Steve’s side before.

In the official Infinity War promo poster, Steve is prominently flanked by Natasha and Sam, with Bucky curiously relegated to an upper corner along with T’challa, Clint Barton (Hawkeye), Peter Parker (Spider-Man), Rhodey Rhodes (War Machine), and the Hulk. This is an odd collection considering their varied alliances, though their placement in the poster could mean both everything and nothing. It seems rather significant, however, as every other character is alongside someone they’re usually associated with: Thor and Loki; most of the Guardians save sisters Gamora and Nebula, who are also pictured together; Scarlet Witch and Vision.

(Tony Stark gets a spotlight all his own because he’s Robert Downey Jr. and freakin’ Iron Man, and Dr. Strange has no friends, so.)

New art that emerged from the Russian social media site VK.com over the weekend offers a more detailed look at Team Cap (minus Bucky. Sorry, buddy) in all their finery: 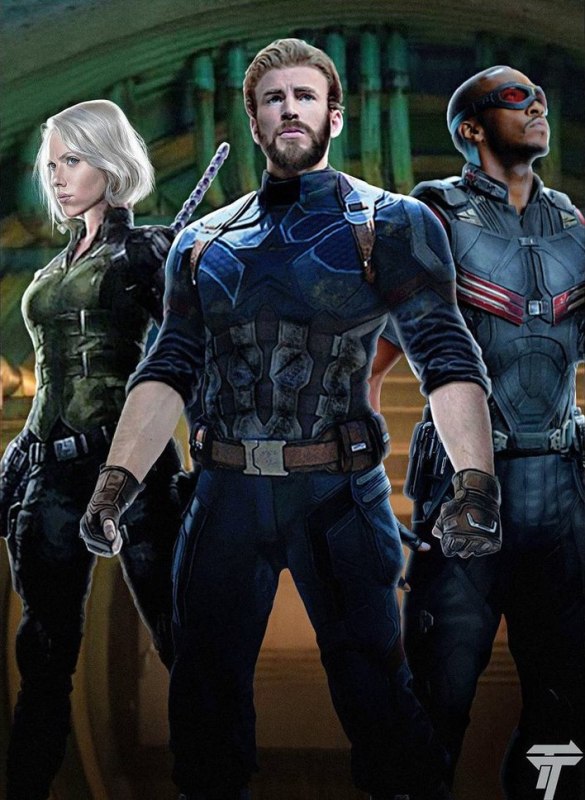 These costumes are in line with promotional cut-outs fans have been seen posing with, so I’m going to assume that they’re genuine for our purposes.

New look at Thor and Black Widow as they appear in ‘AVENGERS: INFINITY WAR’ has surfaced from promo stand-ins. (S: @vikermine on Instagram) pic.twitter.com/gZSRqOswbC

In some Infinity War promos, Steve appears to still be rocking the red, white and blue as part of his suit. Whether it’s the lighting in this new art or he goes for a costume change at some point, he is now looking very Nomad, Cap’s comics incarnation when he decides that he’s “a man without a country” and exchanges the stars and stripes for a whole lot of royal blue. I love that he has his sleeves pushed up, like he doesn’t give a damn anymore about any kind of dress protocol or those pesky Sokovia Accords.

(But would it have been too much to ask for that Nomad-ic vee cut, Marvel?)

I am all about every bit of this restyled Steve-gone-rogue, though it seems like here he’s gotten the chance to trim the wild man beard and hair back a bit. Bearded Cap has long been a fan request and fixation, and it looks as though the beard isn’t going away anytime soon, even if Steve eventually picks up a comb and manages to run it through his hair. Which is good, because I once wrote a love letter to that very beard, which is dark and full of secrets.

Natasha’s platinum-dyed locks are incredible, and she seems to have acquired a fighting staff that I could not be more excited to see in action. As for my beloved Sam Wilson, his flight suit appears to be sleeker and darker than it looked in Civil War, adding to the overall foreboding tone of impending intergalactic warfare that Infinity War is setting up.

What’re you screaming about today?