Valkyrie Was Almost a Love Interest in Thor: Ragnarok—and She Could’ve Rocked a Very Different Look

Also, give us our Valkyrie movie right now. Thank you. 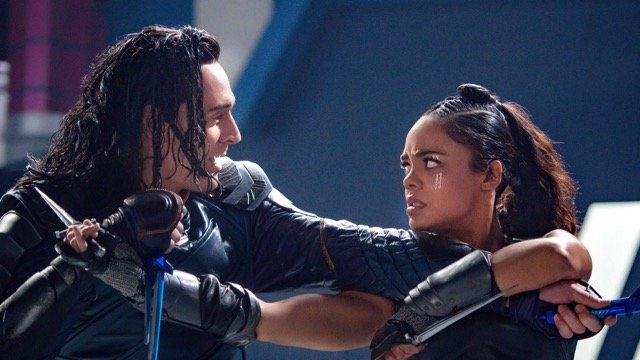 Thor: Ragnarok concept designs from Marvel artists reveal some of the visions that didn’t make their way into Taika Waititi’s hit. They’re all fascinating, and beautifully rendered, but I only have eyes for Valkyrie. The character was as wonderful—and important—as we hoped.

Tessa Thompson’s Valkyrie is a remarkable female character to be found in a big-tent superhero film, and I hope she’s a sign of things to come. Thompson as Valkyrie not only gives us our first POC queer-identified MCU movie hero, but her character is multilayered: strong, flawed, calculating, caustic, grieving—and never relegated to the love-interest role, though in different creative hands that may not have been the case.

(There’s some heat between her and Thor, and earlier Ragnaok plans intended them to hook up, but that subplot was cut—all the better for a fun and game-changing movie that didn’t need a romantic interlude shoehorned in.)

In fact, Ragnarok may be the only MCU movie to date where the hero(es) remain unattached and don’t even engage in some obvious flirting/and or pining. 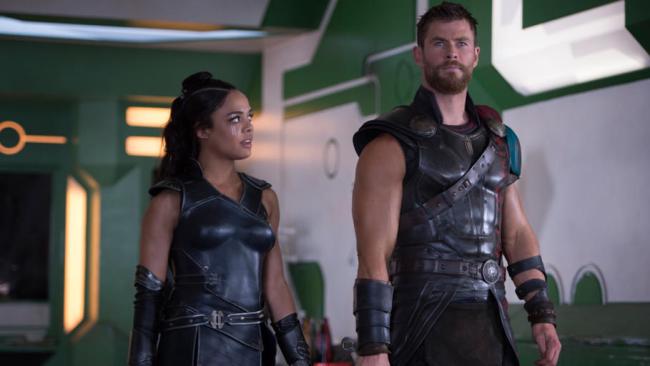 As Ragnarok screenwriter Eric Pearson said: “We didn’t want to start from that place. It was like, Let’s give Valkyrie her own story that connects with Thor … and if it makes sense for them to get together, then great. You’ve got two really good-looking people who can fight and who’d probably be [good together] if the story went there, but it just didn’t. It became more about the mutual respect and also dealing with her PTSD. She’s someone who’s drowning her sorrows in the bottle, and I just thought that was such a cool thing that you don’t often see in these movies: somebody dealing with extreme guilt and shame in a colorful, Taika Waititi[-directed] hilarious background.”

Minutes into Valkyrie’s fiery, dramatic introduction, she falls drunkenly off the side of her spaceship, which is about as Ragnarok in tone as you can get. Valkyrie’s tragic backstory is balanced by her current-day cynicism and capacity to drink a lot, which makes for a kind of smartly sarcastic character women rarely get to play. Once Valkyrie joins Thor’s “Revengers” team she’s all-in as a brave and bold Asgardian badass lady warrior, but that’s not all she is. If we’d just been allowed to have more of her bisexual identity on-screen, I’d deem her depiction in Ragnarok to be perfect.

Concept art that Marvel Studios artist Andy Park shared on social media shows an early design for what Valkyrie could’ve worn into the epic battle that she and her sister warriors waged against Hela in the long-long ago.

Alternate concept design painting I did of the Asgardian look for the Valkyrie. I wanna watch a whole film with @tessamaethompson and the Valkyries of Asgard. Right? pic.twitter.com/Q0FJ7fBW28

The costume that Valkyrie ends up wearing in the gorgeous, devastating flashback scene is more simple, sleek, and brightly-colored than this early concept. No feathered cape that evokes wings, no heavy armor or elaborate helmet. I like both designs—but I especially love that in Park’s initial version, Valkyrie’s armor is both practical and elegant, without even a hint of sexualization. It also has more of a traditional Asgardian feel and flare than the costume we get in Ragnarok.

Ultimately I understand why they went the way they did: the costume she wears into the Hela confrontation is the same as the one that Thor gives to her before the Bifrost battle, and this version feels much more modern superhero-y and more like a supersuit we’re accustomed to seeing. If Valkyrie shows up in Infinity War wearing something like it, she’ll fit right in. 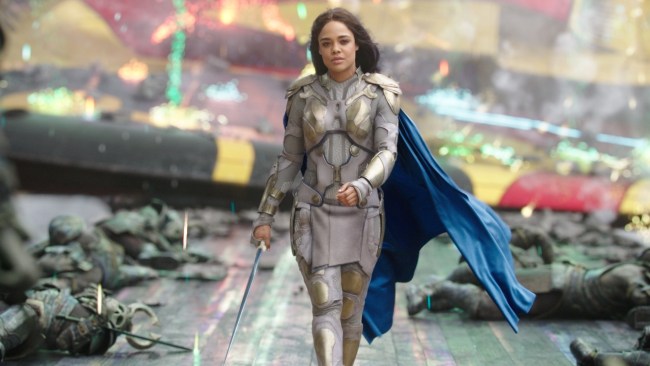 On his Instagram, Park wrote, “It was fun to visualize these elite warriors that would defend Asgard back in the day. I loved that flashback scene in the movie!” (We all do, Mr. Park; bless Loki and his magic tricks for once.) Then he doubled down on his tweeted sentiment: “I wanna watch a whole film with @tessamaethompson and the Valkyries of Asgard. Right??” RIGHT.

Honestly, I can’t conceive of more timely characters for Marvel to put into rotation. The Valkyries would mirror Wonder Woman‘s Amazons as an all-female fighting force of mythical proportions to be reckoned with—and we saw how well-received those Themyscira scenes were (many of us said that we would’ve gladly watched a whole movie set there).

The Valkyries’ setting in Asgard and, more broadly, the Nine Realms, plus their grounding Norse myths, would provide literally endless intergalactic adventures for them to go on. And with the captivating Tessa Thompson in the lead, Marvel could not go wrong. Thompson has also been vocal about wanting to see an all-female superhero movie made, and she just might have started the ball rolling:

“Recently I marched up with a couple of other women who work in Marvel and [president of Marvel Studios Kevin Feige] “How about a movie with some female superheroes? Like all of them,” Thompson said.

Feige replied, “It was a pretty amazing moment to be somewhere and have your shoulder be tapped and turn around find every female hero we have is standing there going, ‘How about it?’ And I said ‘yes.’”

Thompson approached Feige with canon in hand: there’s precedent in the comics for a team of female superheroes—the Lady Liberators—whose original incarnation was headed up by Valkyrie and included Black Widow, Scarlet Witch, The Wasp, and Medusa. Later they would be re-established by She-Hulk, and its members were “Invisible Woman, Storm, Valkyrie, Thundra, Spider-Woman, Tigra, Black Widow, and Hellcat.” There is so much that Marvel could do here that the possibilities are endless and exciting to contemplate. And there’s no reason that more Valkyries, modern or transported from the past, couldn’t join the Liberators in their fight.

In conclusion, give Tessa Thompson all of the Marvel movies (and cast her in everything else). The role she’s playing in the MCU right now is a vital one: an independent woman, unbound by affection for any man or woman, fiercely in control of her own decisions, and able to meet any challenge head-on.

I’m delighted to live in a world where one day @TessaThompson_x could potentially deliver this scene ☺️ pic.twitter.com/KIwTuAgnoL

(via Comicbook.com, where you can also check out concept art for Hela, Thor, Hulk, and Surtur; images: Marvel)