"Man, there is just so much movie in this movie."

Honest Trailers points out that Infinity War goes all-in on the 18 movies-worth of canon from the start, hardly bothering to introduce anyone or explain what’s happening. “You’re either on this hype train by now or the Winter Soldier using Rocket Raccoon as a sidearm won’t mean shit to you.”

I mean, it’s true. If I took someone to see Infinity War who had never seen a Marvel movie before, I’d need to spend the entire movie explaining who these people are. Like:

“Captain America, who heroically accepts his reduced role as guy who knows a guy.” Let’s be honest, Steve Rogers was given nothing to do in this film after that promising entrance in Edinburgh featuring Chris Evans and his beard emerging from the shadows. “I am Steve Rogers” said to Groot is pretty great, but this is Captain America we’re talking about and he has fewer good scenes than a sentient tree.

“Black Panther, whose lack of screentime proves that no one knew how big of a deal he’d be.” This, only underlined a hundred thousand times.

“The X-Man who’s completed her Halle Berry arc of losing her weird accent as the movies go on.” Since I had Age of Ultron surgically removed from the part of my brain that records memories, I totally forgot that the MCU initially had Elizabeth Olsen do a vaguely Eastern European accent for Wanda that has just kind of … fizzled out.

I will probably never stop laughing about the picture above.

“Bucky, the one-armed artisanal goat cheese farmer.” Where is the lie? Bucky Barnes just wanted to hang out with his goats in peace in Wakanda. Why can Bucky Barnes never have nice things?

“Wow, the only heroes missing are the ones on all those Netflix shows that Kevin Feige hates.” A deeply scalding burn, but truthful.

Then we come to Avengers: Infinity War‘s central plot: “For all the characters crammed into this thing, thrill as it centers around a buff bald guy trying to grow his rock collection.” Lest we forget that Thanos is a truly terrible father figure—but that he is embraced in other manifestations of the term—we are reminded: “You, sir, are a really bad stepfather, but dang, what a great daddy.” 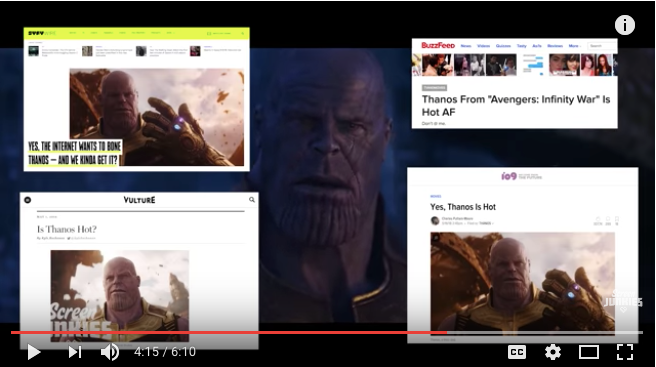 Although we routinely shame our Princess Weekes about her unquenchable Thanos thirst, apparently she is far from alone.

What was your favorite part of the trailer? I think this is all pretty spot-on, but considering how well Honest Trailers nailed Ready Player One to the wall, I think they could’ve been even meaner here.