Ready Player One Honest Trailer: “So This Is How Imagination Dies”

The Honest Trailer for Steven Spielberg’s adaptation of the Ernest Cline book Ready Player One pulls no mocking punches.

I’m going to try and reserve my own Ready Player One judgments here, and leave this brilliant Honest Trailer to skewer the weaknesses of the film, like the *gasp* birthmark that is meant to render Olivia Cooke’s Art3mis/Samantha less than “perfect.” Or keen observations about the characters’ avatars in the OASIS universe like so: “So you can be anything that you want, and they all went with slight exaggerations of themselves? Come on!”

The Honest Trailer commentary on this movie is so excellent I’m going to reproduce it here in case you’re not in a place where you can watch video at the moment. If you want to know about Ready Player One, the movie, well:

“Do you like references? Because this movie’s got more references than a Big Bang Theory episode about the Justice League challenging the Avengers to the anime edition of Trivial Pursuit. Full of obvious nerd touchstones, oddly specific late ’90s stuff, and an extended sequence that asks, what if Kubrick was so hard-up for cash that he sold The Shining to Universal Studios Florida? ‘Now let’s go to 2001 Land! I wanna ride the space baby!’

“So ride along with visionary director Steven Spielberg as he brings his trademark wonder to a tale of an America in chaos where we ignore our problems by using recycled pop culture as an escape and only take action when our corporate overlords threaten to put more ads in our pay-to-win video games, while the offline world continues to slide into extreme poverty and environmental collapse. Ha … ha, who doesn’t love a good fantasy, am I right? Good one, Steve!”

What do you think? Did this Honest Trailer render Ready Player One correctly? I’m pretty sure that all viewers of the film can at least agree on the following: 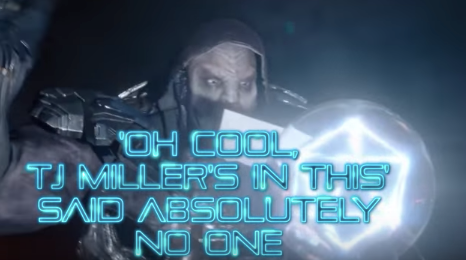