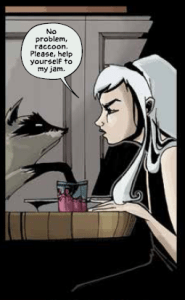 An Aurora Grimeon Story: Will o’ the Wisp is a brand-new Archaia title coming in November, by newcomers Tom Hammock and Megan Hutchison.  Clocking in at over 200 pages, this graphic novel is a doozy for a couple of first-timers, and fortunately it does not disappoint. An all-ages comic set in the Louisiana swamps, it manages to mix mystery and voodoo tradition in a haunting atmosphere, culminating in a tense showdown between malevolent forces from the spirit world and our determined young protagonist, Aurora Grimeon, as well as a cadre of friends and family to help seal the deal.

I admit, I’m always a little leery when something mentions references to voodoo traditions in the south, largely because too often it turns into a racist caricature rather than actual representation. I know that I, myself, would never touch that as a topic because I’m about as far from southern Louisiana as you can get as far as background goes, and no matter how much research I put into it I’d always be an outsider looking in, indulging in voyeurism instead of respect, and I’ve made it a personal mission to try really hard not to be that guy. So it was with some reticence and hesitation that I approached this graphic novel, and I was happy to be largely relieved to see its characters treated like human beings and not cartoon characters.

Story-wise, there are some elements that I question in the beginning of the novel, like the contrivance of Aurora being orphaned because her parents ate some bad mushrooms by accident (because, as I’M SURE we all know, the mushroom pickers motto is “when in doubt, throw it out”), but around chapter two it manages to get its legs under it and have a much firmer grasp of where it’s going and what kind of story it wants to be. I’d chalk it up to inexperience, in this case, and given how well the novel turns itself around into something entirely engrossing by the end, completely forgivable in the hopes that we’ll see a lot more of this kind of work. 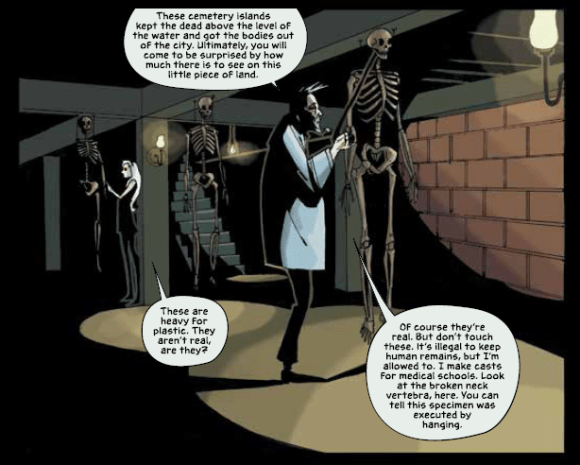 The art is deliciously moody, and while my first impression of Aurora was a bit of uncanny valley and a feeling of being entirely out-of-place with the rest of the scenes she’s in, it becomes readily apparent that this is on purpose, an effort to show her transition from orphaned city girl to being entirely at home in the creepy, dark, and haunting swamp. If you are the least bit a fan of moody, shadowy art, you’ll definitely enjoy lingering over these pages. The book is at its best when it’s heavy with shadows, moody and dark and eerie, showing us only as much as we need to see and letting our fears and our imagination fill in the rest, like any good ghost story.

Overall, I’d definitely recommend this as a book worth picking up, and largely I’m excited to see more from these two in the future.

We were fortunate enough to get an interview with the artist, Meg Hutchison:

JAYDOT:  Hi! Straight off the bat, how much of your experience in motion picture production design bled into this project?

MEGAN HUTCHISON: I was drawn to this project because of my production design background. The opportunity to create a world in the swamp with ruins, Victorian mansions, and sunken steam boats is any production designer’s dream. What made this creative endeavor so much fun was the chance to fully immerse myself into this world and create these very unique, specific places. I also focus on color, texture, lighting, decor, wallpaper, and props, which all come from being a production designer and filmmaker.

JAYDOT:  You definitely captured the setting and mood near perfectly, but why a graphic novel in particular? I know this is your first foray into that field, what made you decide to produce your work this way?

HUTCHISON: Like most geek girls, I grew up reading and loving comic books and graphic novels. I always wanted to create one but never had the time or opportunity. When the chance to create one was given to me, I couldn’t pass it up. There is something so magical about the art form. As a little girl, I would read comics and fantasize about making them. Now I get to!

JAYDOT: Which is awesome! As a first-timer making a graphic novel for print, what were the biggest obstacles or surprises in the work?

HUTCHISON: I was not mentally or physically prepared to create a 200-plus-page graphic novel my first time out of the gate! I had to teach myself to sit down at my drawing desk and draw page after page for about two years while keeping my day job without throwing myself off a bridge. However, about three-quarters of the way through, I learned patience and diligence which helped me not only finish the book but also love the process. I also developed a pretty legitimate repetitive stress injury in my wrist from drawing so much, but such are the sacrifices for art.

JAYDOT: Man, ain’t that the truth. There are a lot of haunting moments in this book. Do you have any particularly haunting memories of your own that informed your art?

HUTCHISON: A few weeks ago my mother found an old sketchbook of mine from when I was 5. In it I had drawn skeletons, spiders, and witches. This is very telling not only of my character but also what I’m attracted to. I’ve always been enticed by the dark and macabre. I loved sharing that part of myself through the making of this book. I wanted to share the spooky and mystical with the audience through my art.

JAYDOT: Comics Alliance compared your works to those of Neil Gaiman and Tim Burton. Do you count them among your influences or are there others you feel have a bigger impact on your work?

HUTCHISON: I grew up with and love both Neil Gaiman and Tim Burton. They, along with Mike Mignola and Dave McKean, have had a substantial impact on my art. However, I think that most of my influence comes from my time growing up going to art galleries, my background in graphic design, and my undying love for animation. I love classical painters such as Caspar David Friedrich and Jacques-Louis David, who paint with dramatic themes and dark compositions. Composition, line, color, light, and shadow are ingrained in me though my training as well as a touch of urban art. (I wanted to be a graffiti artist when I was younger). I also love animation, foreign in particular. Although I grew up on Chuck Jones and anime, I am very heavily influenced by Peter Chung, the Quay Brothers, and Miyazaki, which can be seen in my character designs and expressions.

JAYDOT: Are there plans for more Aurora Grimeon stories in the future?

HUTCHISON: Yes! We developed the Aurora Grimeon Stories to be a trilogy, so there will be more in the future. We will grow up with her and take her on more adventures not only in the swamp but also into New Orleans, which will be fun to create. I’m also developing another project based on my other passions: astrophysics and science fiction. That is still in the early phase, but it will be more mature, a shorter run, and in a different style—ink and watercolor. The future holds many more creepy, fun, dark mysteries to create and illustrate.

An Aurora Grimeon Story: Will o’ the Wisp will be available in November through Archaia.