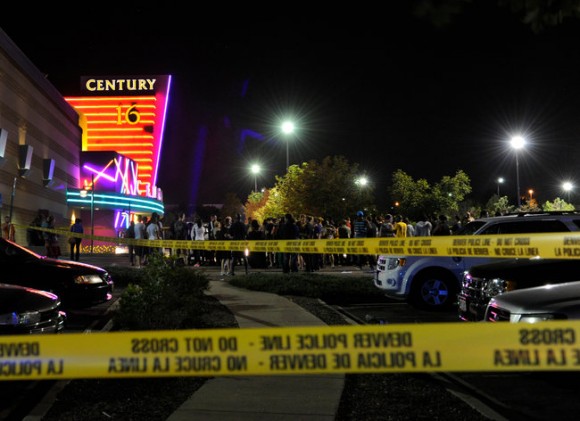 On a morning when the most we could have expected to wake up to was the news that The Dark Knight Rises had smashed midnight screening records just as its predecessor The Dark Knight had done, we are instead waking up to something very different. Our hearts go out to the families and friends of the victims of a horrific shooting in Aurora, Colorado, a neighboring city of Denver, where a man named James Holmes killed at least twelve and injured fifty people in the wee hours of the morning as their screening of The Dark Knight Rises began.

According to reports, Holmes entered the theater wearing a bullet-proof vest and gas mask, armed with tear gas, a hand gun, a rifle, and a knife. After releasing the gas into the theater, he opened fire. According to witnesses, the sounds were, for a few moments, mistaken for being part of the movie. He was apprehended behind the theater by law enforcement. Police said he did not attempt to flee or resist. According to the Denver Post, the FBI do not suspect any connection to an organized terrorist group, and as of the publication of this post no hard information on his motives has been made public.

President Obama has released what is likely to be only the first of his statements regarding the shooting:

Michelle and I are shocked and saddened by the horrific and tragic shooting in Colorado. Federal and local law enforcement are still responding, and my administration will do everything that we can to support the people of Aurora in this extraordinarily difficult time. We are committed to bringing whoever was responsible to justice, ensuring the safety of our people, and caring for those who have been wounded. As we do when confronted by moments of darkness and challenge, we must now come together as one American family. All of us must have the people of Aurora in our thoughts and prayers as they confront the loss of family, friends, and neighbors, and we must stand together with them in the challenging hours and days to come.

Cast and crew of The Dark Knight Rises were to have attended the movie’s Paris premiere today, however, Warner Bros. has cancelled the screening and all of today’s scheduled press interviews and public appearances. As of the publication of this post, Christopher Nolan and cast have not made public comment. The Mary Sue and likely many other nerds, geeks, cinemaphiles, pop culture appreciators, and simply anyone who appreciates art and the public and shared consumption of it feel particularly affected by the way this shooter has managed to take, as Alyssa Rosenberg puts it a “product of genuine enthusiasm and an expression of collective joy,” a “genuinely mass cultural event,” a moment of “shared enthusasim” and “suspension of belief,” the midnight screening, and twist it against itself.

Warner Bros. is deeply saddened to learn about this shocking incident. We extend our sincere sympathies to the families and loved ones of the victims at this tragic time.

Update: President Obama adressed the shooting in a speech this morning, and ordered flags to half mast until Wednesday.

(Many links in this story found via In Other News and The Huffington Post.)