Conservatives Are Mad About the Loss of Yet Another Racist Symbol: Aunt Jemima 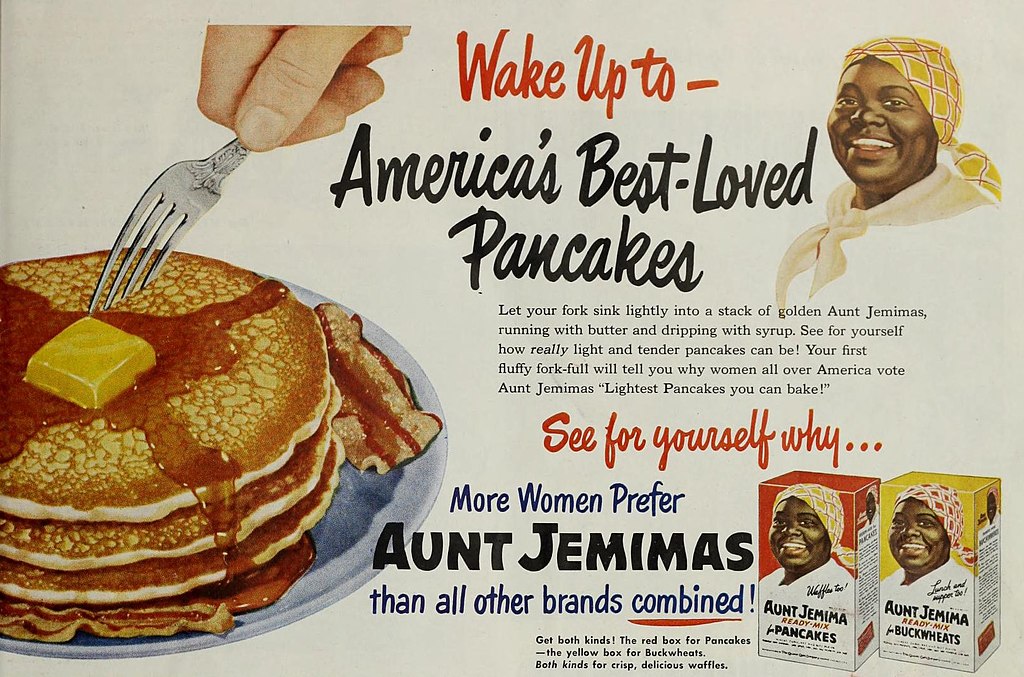 Things are happening right now that frankly should have happened decades ago. Thanks to nationwide protests of systemic racism, brands and corporations are finally paying attention to things people have been saying for years, and now PepsiCo will retire the Aunt Jemima brand. The products and line will be renamed and the mascot with its roots in racial stereotypes will be no more. It’s a small victory, but long overdue. And of course, the usual suspects are outraged about the change.

Aunt Jemima’s origins go back 130 years, right after Reconstruction and deep in the era of Jim Crow. Surprising no one, “Jemima” was not a real person, but an embodiment of a “Mammy” archetype as seen in minstrel shows, where the “Aunt Jemima” figure was often played by white men in Blackface, and later, in many Hollywood films. The name “Aunt Jemima” came directly from minstrelsy and the original representative face for the image of the “Aunt Jemima” pancake brand was a woman born into slavery in 1834 named Nancy Green. Hired in 1890, Green would go on to make thousands of appearances as “Aunt Jemima,” with her image used across a variety of merchandise and advertisements.

The relatives of another woman who was later hired to portray Aunt Jemima, Anna Short Harrington, sued Quaker Oats (the parent company of the brand) in 2014 because they claimed that both Green and Harrington were not paid adequately for how much the company profited off their images. Harrington’s grandson explained, “Aunt Jemima has become known as one of the most exploited and abused women in American history.” The suit was dismissed, and at the time, PepsiCo claimed, “The image symbolizes a sense of caring, warmth, hospitality and comfort, and is neither based on, nor meant to depict any one person.”

The presence of Aunt Jemima on grocery store shelves for over a century is emblematic of how deeply racist stereotypes, especially those associated with Blackface and minstrelsy, are woven into our culture. Even after Jemima got a revamped look that slimmed her down and removed the “mammy” kerchief, her name still had origins in racism and white supremacy.

But it took nationwide protests and, of course, a viral internet video for PepsiCo, which owns Quaker Oats, to really take a look at the brand and mascot that’s been criticized for ages.

Quaker says that removing the mascot and brand it a step “to make progress toward racial equality.” They have now apparently realized that Aunt Jemima is a brand deeply rooted in racism and it simply can’t be updated to be not racist (again, this has been quite obvious for a very long time).

Quaker explained in a press release: “We recognize Aunt Jemima’s origins are based on a racial stereotype. As we work to make progress toward racial equality through several initiatives, we also must take a hard look at our portfolio of brands and ensure they reflect our values and meet our consumers’ expectations.”

Unsurprisingly, conservatives and the angry-at-“snowflakes” Twitter crowd are pitching a fit over this.

My dude, she’s a bottle of syrup pic.twitter.com/Uc7vI1Q8b5

But now it’s too late

You could have stopped this https://t.co/WFCAk7GkKO

How does renaming a syrup brand make any progress toward “racial equality?”

To summarize how this is being covered across networks:

CNN: Quaker Oats is removing the name and image of Aunt Jemima

MSNBC: Quaker Oats will remove the name and image of Aunt Jemima

Fox News: WE MUST PRESERVE OUR SYRUPY HERITAGE!

There certainly are other brands with mascots that are suspect. Aunt Jemima was a “mammy” caricature but there are other minstrel and racist stereotypes associated with food, particularly “Uncle Toms,” which The Atlantic categorizes as “cheerful, servile black men” such as Uncle Ben (he even has Uncle in the name!) and the Cream of Wheat mascot.

It’s important to take note here that there’s a been lot of racism in our kitchens over the years, and much that remains. Rebranding Aunt Jemima is just one step in the direction of correcting that. Back in 2012, The Atlantic’s Jonathan Gritz asked Professor David Pilgrim, whose extensive collection was going on display at the Jim Crow Museum of Racist Memorabilia, “How do you communicate to people that these objects are demeaning, even if they’re connected with a genuine sense of nostalgia?”

Pilgrim’s response was as vital then as it is now: “That’s the real purpose of this museum. We want to take someone who sees the Aunt Jemima label as a nostalgic thing, a picture that reminds them of good times, and introduce that person to someone who sees it as a vestige of slavery or segregation. We want to do the thing we as Americans seem to not want to do—which is talk. As crazy as that sounds, it actually works.”