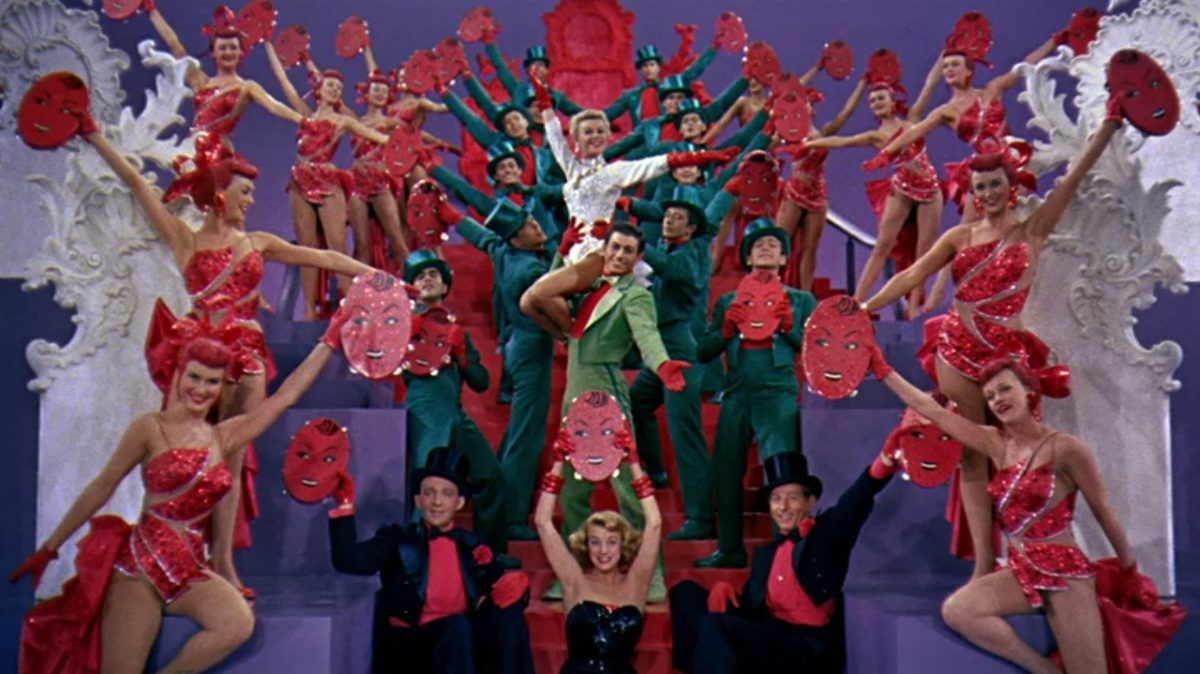 If you ask me what movie I put on first thing in December to get in the holiday spirit I’ll tell you right away that it’s White Christmas. The 1954 musical is a classic for a host of reasons: the sparkling dialogue, the incredible dances with Vera Ellen, the comedy of Danny Kaye, the fantastic costumes by Edith Head, and the indelible voices of Bing Crosby and Rosemary Clooney.

White Christmas exemplifies the best of classic Hollywood…but it’s also an interesting sort of rosetta stone for some of the worst tendencies of Hollywood’s golden age when it came to race: that rather than be inclusive of in anyway interrogate America’s racism, they just ignore it completely even when the now-classic songs have racists history. White Christmas ties directly into Hollywood’s checkered history with blackface, minstrel shows and the complicated legacy of one of America’s greatest songwriters: Irving Berlin.

I’m not going to mine for outrage and call White Christmas a racist movie. Explicitly and textually it’s not racist…but that’s only because there are no black people in it aside from one bartender in the club car in the “Snow” scene. The movie on its face has the same problems as most films of its era: it was made by white people for a white audience and carried with it the inherent racism of Hollywood and its time. And one of those people was the greatest American songwriter in history, Irving Berlin.

Irving Berlin, the composer of “White Christmas” and “God Bless America” was a Jewish, Russian immigrant who came to America when he was only a child. Raised the son of a synagogue cantor, Jewish music was a huge influence on his early life and music. He came up in the teens, garnering success as a songwriter and served in the army, writing songs for all-soldier revues during World War I (we’ll come back to that). 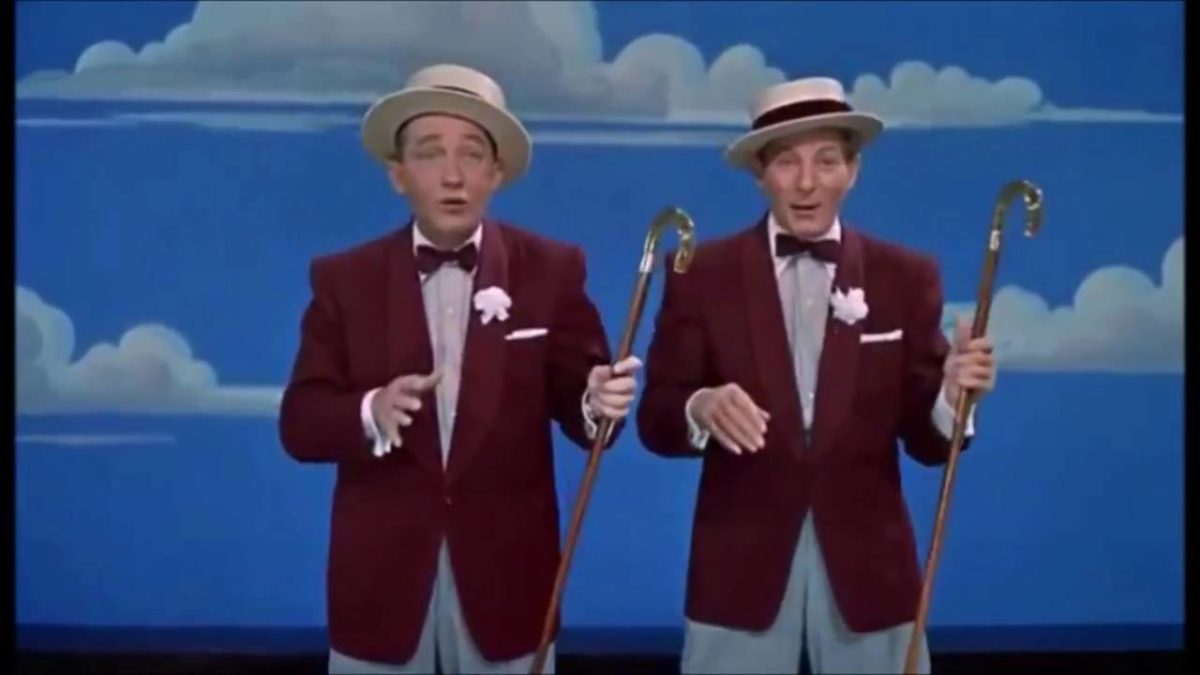 One of Berlin’s first big hits and the second song we hear in White Christmas is “Blue Skies.” Originally composed for a forgotten Ziegfeld production called Besty, “Blue Skies” has one of the most complicated racial histories of any song out there. The way “Blue Skies” sounds, according to musical historians, was clearly “Jewish” to many listeners in the 20s, but it still became a hit. And it also became the first music ever used in a movie when it was sung by a Jewish character in blackface in The Jazz Singer.

The contrasts of The Jazz Singer and the first use of “Blue Skies” are emblematic of so much of how early and golden age Hollywood dealt with race. People who faced discrimination themselves – antisemitism in the case – still engaged in racist things, like blackface. I don’t know if Irving Berlin knew or felt that blackface was racist at the time, because The Jazz Singer wasn’t Irving Berlin’s first or last interaction with blackface and the larger minstrel tradition it arose from. And that’s what brings us back to White Christmas where this song and so many other are scrubbed of their racial and formerly racist context.

First, a detour. Minstrel shows and blackface arose first among white performers in the 1830s and involved those white performers painting their faces in caricatures of black slaves. They had their own tropes, stock characters, jokes, and musical language. Black performers eventually joined in these performances as well, and their versions often sought to subvert and mock the stereotypes in these shows.

While Minstrel shows themselves fell out of popularity in the 20th century, blackface persisted and so did the many tropes and stereotypes from those minstrel days, such as “Mamie” characters, or the visuals of a black or blackface character wearing white gloves (see: Mickey Mouse). We still live with minstrel relics in our culture – White Christmas being just one of them. The fading of these shows from the scene led some to be nostalgic for them, including a younger Irving Berlin. 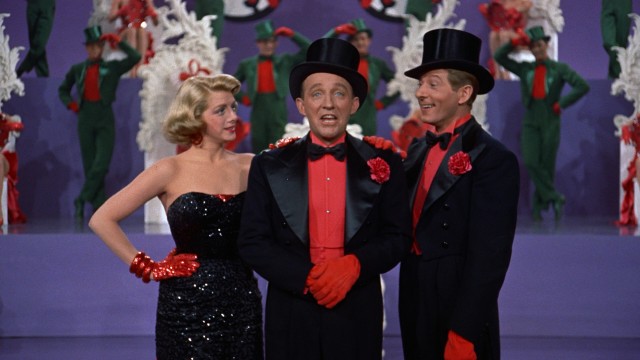 Clooney, Kaye and Crosby look back fondly on the minstrel days they miss.

Now, back to White Christmas. Remember a few paragraphs back when I told you about Irving Berlin’s time in the army in WWI? Well, that was before he had ever heard of talking pictures or contemplated Al Jolson (who gets a shoutout in White Christmas) singing about a “Mamie” on screen, but blackface and minstrelry were part of his cultural vocabulary so much even then that he wrote several numbers for his all-soldier army revue that were either about or influenced by minstrel shows and one of those songs was “Mandy” and the so-called “Minstrel Number” that eventually made it into White Christmas nearly four decades later.

While “Mandy” is innocuous when taken alone, the number in White Christmas that proceeds it, when Crosby, Kaye, and Clooney sing of their longing for “The Minstrel days we miss” is more complicated taken in context. The three leads singing so fondly about shows that were just so funny seems quaint…until you realize they’re lamenting the loss of a racist, harmful artform that went out of style half a century before.

It was nostalgic racism in 1917, and maybe made more sense then, but just it’s just weird in 1953. If you don’t know what a minstrel show is, the song is perfectly fine…but if you do, its a very weird thing to hear in a musical that is otherwise pretty far removed from minstrelry. But that’s because White Christmas is a showcase for Berlin songs that were sort of stitched together from everywhere, including other far more problematic properties.

White Christmas is what we’d essentially call a jukebox musical nowadays. Most of the songs were not written for the movie, and it’s just a tour through decades of Irving Berlin’s music, including many songs he wrote when he was in the army because White Christmas is about a pair of WWII veterans. Many of the army related songs we hear in the show are from the same revue – called Yip Yip Yaphank – that “Mandy” comes from while others are repurposed from the 1943 movie Holiday Inn, where the song “White Christmas” was first heard on screen. 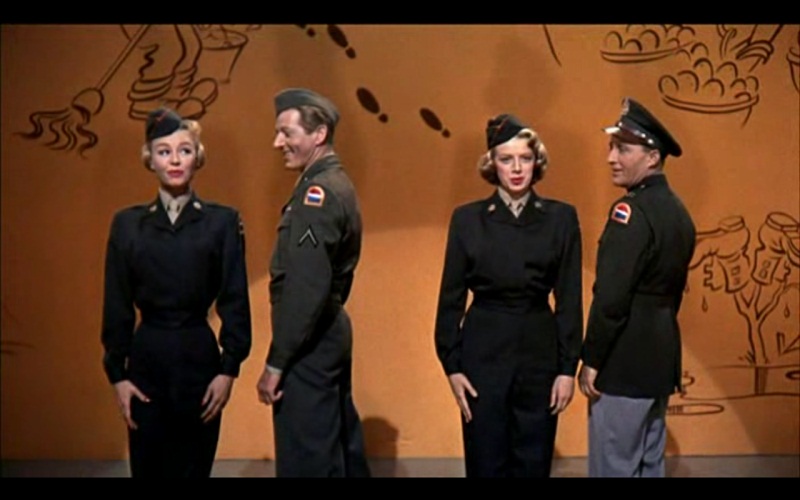 One of many army-centric numbers repurposed for White Christmas.

The idea to make a movie based on the song “White Christmas” itself, which already had been featured in a movie, might have been a cash grab that came from the fact that the song became such a touchstone for soldiers serving in World War II (Bing Crosby talks about how singing it for the troops was a deeply emotional experience, one that’s recaptured in the film). But I like to think it also might have to do with the fact that, while White Christmas isn’t a really racist film…Holiday Inn certainly is.

Holiday Inn stars Bing Crosby and Fred Astaire and is about a hotel that’s only open on Holidays (which seems dumb) and they start scraping the barrel for holiday songs really fast. The worst offender by far though it the super-racist “Abraham” number which is about Lincoln freeing the slaves. The number is not only performed by Bing Crosby in blackface (along with the band and dancers), there’s a section where the Mamie character (that’s her actual character name!) sings a verse to her kids…in the kitchen. A song where white people in blackface and a black family that’s kept in the kitchen praise a white man for freeing the “darkies?” It’s appalling to watch now.

This song, like other racially icky songs, is actually used in White Christmas in a non-racist way. We actually hear “Abraham” only in an instrumental version as Vera Ellen dances her tail off. The racist parts of it aren’t there. The same is true of the minstrel number, which has only the slightest hint of minstrel or blackface imagery in the caricatures we see on some of the backdrops. The same goes for “Blue Skies” which is just a brief song we here in a montage. Much of what was problematic has been removed from these songs – except their history. 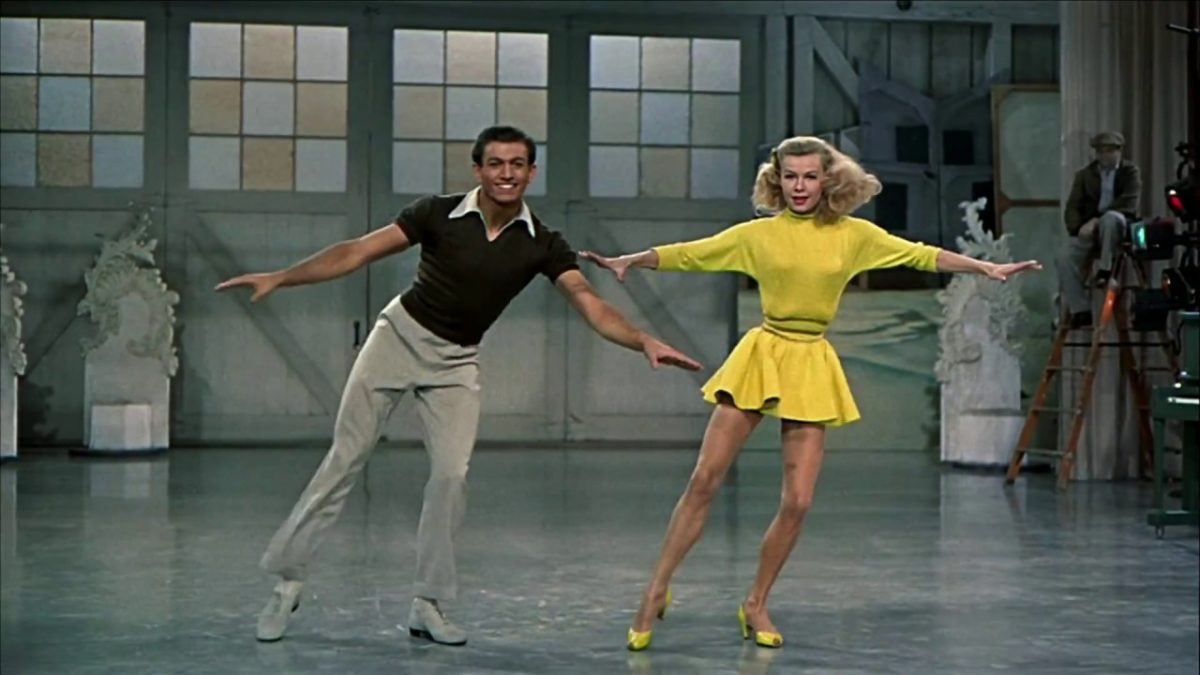 The “Abraham” number in White Christmas is purely a dance break.

White Christmas might as well be called White-washed Christmas because it does sweep so many elements of its songs that were used in racist ways in the past under the rug. But is that okay? Having “Blue Skies,” “Mandy” and “Abraham” in the film as they are is certainly better than the way they were presented in other movies and shows; and without context, they’re fine songs. “Blue Skies” in particular only gained racist associations with blackface after it became popular. But the past use of these songs in associations with minstrelsy and blackface also can’t be erased.

I don’t think there’s an answer here, only a conversation. White Christmas is a classic movie that I love and its music is iconic in many ways. But it’s important to understand the cultural context of the movie and the music to see where it fits in a larger, longer story of American culture and race. The same goes for Irving Berlin himself, who was part of a larger American cultural tradition that was suffused with racism, and he did his part both to perpetuate and subvert it.

“White Christmas” – the song, is the most popular song of all time and it was written by a Jewish man during the summer in California. Every movie and song and piece of art has a story, it’s not always merry and bright. But it always matters.