No One Knows What “Auld Lang Syne” Means. Now, Guess What This Post Is About. 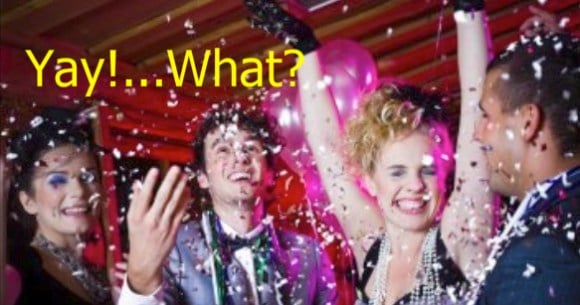 Okay, some people know what “Auld Lang Syne” means, and some might even know some, most, or even all of its lyrics. But why do we sing it at New Year’s … and what does it mean, anyway? Is this something we missed in school? A lost relic of times when we, as a people, drank buttered rum and roast goose at the holidays, somehow stowed away in the dusty attics of our minds, taken out once a year and covered with so many cobwebs that we can barely recognize it anymore? Depressed yet? Come inside, we will learn this together.

For starters, the phrase Auld lang syne is Scots, the language spoken in Lowland Scotland (not to be confused with Scottish Gaelic, which is spoken in the Highlands), and is translated as “old long since,” but used more in the context of “long, long ago.” In the case of the song and the lyric “for auld lang syne,” it means something like “for old time’s sake.” The song that we know is a poem written by Robert Burns in 1788 that was set to the tune of an older folk song. But the phrase had been used in poems and songs for centuries before that.

But what does it mean? Here are Burns’ lyrics, though they might not be of that much help, because much of it is in Scots. Lowland native David Tennant was unavailable, so we turned to Wikipedia for the English translation:

Basically, it’s about getting drunk with people you currently enjoy while looking back on good times and remembering old friends, all while singing your sentimental, alcohol-soaked hearts out. The custom of singing “Auld Lang Syne” on New Year’s began in Scotland, when the song was sung on Hogmany aka New Year’s Eve. This spread throughout the British Isles and immigrants brought the song and the custom with them as they settled all over the world. Since then, the song is sung at any occasion that calls for a hearty look back at good times and tradition, like some military events, graduations, funerals (because some people sing at funerals, bless their hearts), and anything marking the end of a good run.

In North America, the song became a New Year’s Eve staple thanks in large part to Canadian band leader Guy Lombardo, who started broadcasting his rendition of the song on the radio every year starting in 1929. He had a couple of versions of it, including this rousing one, which just SCREAMS disco (or just 1977):

He also has this gentler, “I just wanna drink champagne, eat chips and dip, and go to bed at 12:07” version:

And now you know about “Auld Lang Syne.” No more excuses. And we triple dog dare you to sing the Scots lyrics tonight.