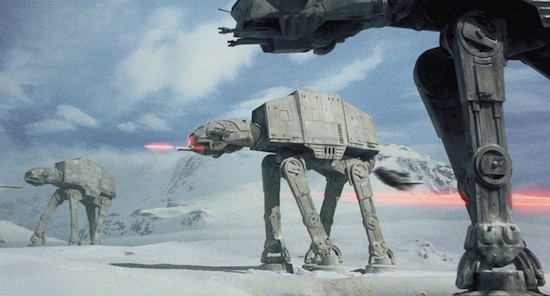 This is about the worthiest technical endeavor we can imagine: A devoted group of Star Wars geeks, led by Oklahoman Mike Koehler, have launched a project called AT-AT for America. The goal: to build a “fully fuctional, full-scale model of an AT-AT Imperial Walker from The Empire Strikes Back.”

Why did you choose a symbol of the Empire’s destructive capabilities to represent the US?

The AT-AT is not so much a representation of the US as it is a monument to what geek culture and its know-how has done for people in the country and, as I am quickly learning, folks all over the world. The can-do and cooperative spirit that nerdy pop culture has inspired can’t be overlooked in the past 30, 40, 50 years.

I wanted to make something that was: A) Doable. Fast-than-light and force field technology made many options unrealistic. B) Big enough to be awe-inspiring. Many people have made R2 units and Back to the Future Deloreans. The AT-AT is 50-feet tall. [Geekosystem editor’s note: According to Wookieepedia, it’s actually more like 74 feet tall.]

The original AT-ATs had some notable design flaws. How will you Ewok-proof it?

No Ewoks will be allowed around the build sites. Sharpened logs will also be strictly prohibited. We are working towards some strong anti-log technology.

Where to begin? Koehler admits that he doesn’t quite know, and has neither great technical expertise nor funds to do this on his own. (Once he has some engineering talent on board, we’d recommend Kickstarter.) But he’s got heart. And it’s for America. Do you have a problem with America?

(AT-AT for America via news.com.au)