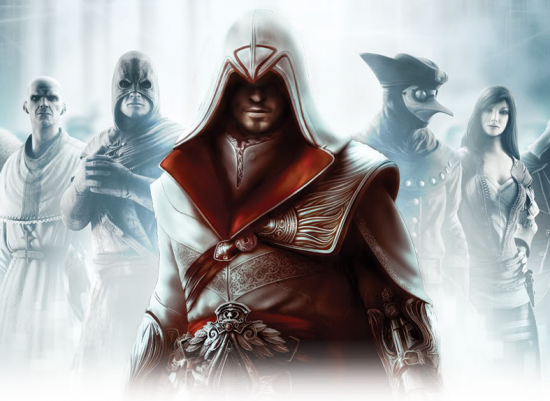 Excited for Assassin’s Creed III? So are we, so I hate to be the bearer of potentially bad news, but Ubisoft is now facing a lawsuit that could block the release of Assassin’s Creed III. Science Fiction author John L. Beiswenger has just filed suit against Ubisoft claiming that the Assassin’s Creed franchise infringes on his copyright by ripping off his novel Link. As such, he’s requesting $1 million in damages — $5 million if the judge rules willful infringement — and that all future Assassin’s Creed releases be blocked.

The complaint, which can be read in full here, lists dozens upon dozens of alleged influences, mostly dealing with the broader strokes of both series. As it turns out, Link also trades in “ancestral memory” and heavy religious overtones, two things that most gamers associate with the Assassin’s Creed franchise. Beiswenger presents an interesting case in that some of the claims seem to fall under “standard sci-fi tropes” while others, admittedly very a small number, are oddly specific similarities.

Some of the broader claims seem like a real stretch. The idea of genetic memory, for example, while not the most common science fiction trope, does date back to before either Link (2003) or Assassin’s Creed (2007). Likewise, Beiswenger’s points out that more links between Assassin’s Creed and Link are interactions with historical figures and references to Gods and Adam and Eve. An effective counterargument might be the entire genre of historical fiction, and religion on the whole.

23. In Link, the Plaintiff’s plot includes the conception and creation of a device and process whereby ancestral memories can be accessed, recalled, relived, and re-experienced by the user.

27. The Assassin’s Creed video game series’ plot is based on the Animus and Animus 2.0 device and process, through which the user accesses, relives, and re-experiences the memories of the user’s ancestor stored in the user’s DNA.

31. In Link, there are spiritual and biblical tones, with references made to Jesus and God, the Garden of Eden, and forbidden fruit.

32. In the Assassin’s Creed video game series and books, there are spiritual and biblical tones, with references made to various Gods, Adam and Eve, and relics called Pieces of Eden.

33. In Link, characters experience notable and accurate historical moments through their ancestors’ memories; this is a major plotline of Link.

Granted, it’s not about just one theme or factor, it’s about all of them together, allegedly stolen wholesale. Of course, some of these tropes are just bound to go hand-in-hand. What kind of writer would you be if you were writing about genetic memory and didn’t give characters the opportunity to experience various historically accurate moments? I mean, you wouldn’t necessarily have to do it, but it does sort of follow, right?

That said, the similarities that are specific are pretty specific. In both Link and Assassin’s Creed, the device used to access memories looks something like a dentist’s chair and involves a blood pressure-like cuff around the biceps. There might be more similarities between the two devices, but Beiswenger’s descriptions are so dense it’s tough to really tell. Both Link and Assassin’s Creed also feature scenes where [Assassin’s Creed II spoilers] a higher power talks to the present day character directly through an ancestor [/spoilers]. It does seem that the scene is much more explicit and is of much more consequence in the latter than it is in the former, however. Similarities on this scale do seem to indicate something fishy, because what a crazy coincidence, right? On the other hand, they seem to indicate that nothing is fishy. If you were going to willfully rip someone off you’d probably change some of those smaller details, right?

Ultimately, speculation isn’t going to settle this matter, but between you and me, I think Beiswenger’s being a little overly defensive of things that can reasonably be considered common literary tropes. Still, a victory for Beiswenger could, theoretically, bring one of Ubisoft’s main franchises to a screeching halt, so the stakes are high. I wouldn’t be too worried though, if I were you. It’s like the saying goes “Good artists borrow, great artists steal.” You know who originally said that? I did.