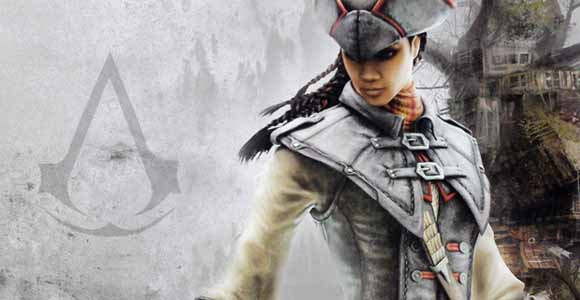 E3 (the Electronic Entertainment Exp0) is currently underway in Los Angeles. Lots of announcements are being made, some more exciting than others, but we’re interested in something just found in a magazine. Assassin’s Creed III is set for release this October but the Playstation Vita is getting a different version called Assassin’s Creed 3: Liberation that features a female assassin named Aveline. Ok, you’ve piqued our interest.

The information was gleaned from the recent issue of Game Informer magazine. The user who sent in the information said, “the game is set in New Orleans between 1765 and 1780. Players take on the role of Aveline, a female Assassin. She’ll be mentored by Agate, an escaped slave. The weapons at her disposal include a machete, pistols and grenades.” She’s said to be of mixed French and African descent.

Now, Assassin’s Creed III is going to be set during the American Revolution and feature a man as usual. The new lead character is named Connor Kenway, but Liberation stars Aveline in the main role. “Because Liberation takes place in the same general time period as AC3, story connections are inevitable,” writes Cinema Blend. “At some point in the game, Aveline will cross paths with AC3‘s protagonist Connor. Desmond’s story isn’t related, though. Instead, someone else is using the Animus.”

As for the technical details, “It’s said you can explore all of New Orleans without encountering a loading screen. Players will be able to travel to the swamps outside the city, and even to Mexico. The Vita’s rear and touchpads will be utilized for pickpocketing. Some sort of multiplayer will be included as well.”

It’s cool that Ubisoft is creating almost an entire new game for the Vita but it’s a bummer that it’s only on the Vita. They had apparently considered a female protagonist for the main game but felt it didn’t fit the setting. Yes, well, that makes no sense if they are utilizing her in the same time period and setting on the Vita version. Not to mention these games are historical fiction and the Animus isn’t a real thing.