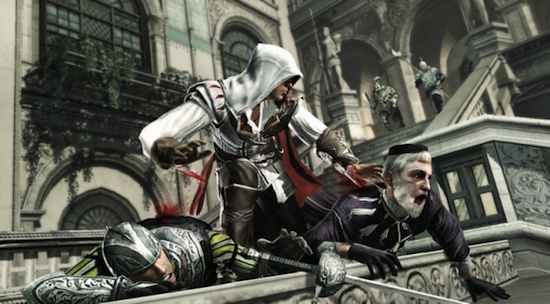 Ubisoft has angered many in the gaming community with its stance on Digital Rights Management and piracy.  The release version of all of its PC games — one of the biggest of which is Assassin’s Creed 2 — now require a constant internet connection in order to make frequent checks with the company’s DRM authentication servers, regardless of whether the game requires internet access for gameplay.

It was predicted by many that this latest effort in the arms race between game makers and software pirates would fall out as it usually does: eventually the DRM would be cracked, and the pirates would play, heaping any and all inconvenience caused by the DRM squarely on honest users.

In March, a cyberattack took down Ubisoft’s authentication servers for a number of hours, making it impossible for legitimate users to play two of their most popular games.  This week, hacking consortium Skid Row published a cracked version of Assassin’s Creed 2, one of Ubisoft’s most popular titles, that is making the rounds of torrent sites.

Their crack reportedly completely removes the DRM, allowing users to play illegally, but without fear of losing save data should their internet connection go out for a moment.

Skid Row even left a personal message for Ubisoft in the cracked version’s readme file:

Thank you Ubisoft, this was quiete [sic] a challenge for us, but nothing stops the leading force from doing what we do. Next time focus on the game and not on the DRM. It was probably horrible for all legit users. We just make their lifes [sic] easier.